Photographers are obsessed by resolution. Camera makers bombard us with adverts proclaiming how their latest models have more pixels for higher image quality, and lens tests hail ever-increasing levels of sharpness. This is exacerbated by our ability to zoom into our image files and view them at pixel-level detail; it’s like being able to make huge prints of every single picture we take, then look at all the finest detail in close-up. No matter how much detail we can currently record, we still seem to crave more and more.

Traditionally, ultra-high resolution has been the preserve of the medium-format market, and it still just about has the edge. The latest Sony sensor used in cameras like the Pentax 645Z offers 51.4 million pixels, with impressive low-light performance. But this camera costs £7,700 with the basic 55mm f/2.8 lens, and by medium-format standards this counts as affordable.

For enthusiast photographers in the market for a high-resolution camera system, the latest generation of full-frame models offers the most enticing prospect. Not only are the cameras somewhat more realistically priced (although still pretty expensive), but they also attain seriously impressive resolutions. Top of the tree now are three cameras with 36-million-pixel sensors, which capture the highest possible detail by foregoing the optical low-pass filter (OLPF) traditionally used to suppress image artefacts such as aliasing and moiré. These are the new Nikon D810, its predecessor the Nikon D800E and the Sony Alpha 7R.

The D800E is something of an oddity. Rather than having no low-pass filter, its anti-aliasing effect is ‘cancelled’. How this works is explained in more detail on page 47, but in effect, it means that some residual blurring may still occur. In principle, then, the D810 could offer even sharper images.

In this test, I’ll be comparing the three cameras to see what, if any, image-quality differences exist between them. I’ll also be looking at new features in the D810 that should help it produce the sharpest possible pictures, and comparing the very different handling of the Nikon DSLRs against the Sony Alpha 7R compact system camera.

In a way, this isn’t just a camera comparison, but rather a battle between the old and the new. The old guard is represented by Nikon, a company that has been making SLRs for over 50 years. Indeed, the D810 can trace its lineage back to the 1959 Nikon F, using basically the same lens mount and through-the-lens viewing via a mirror and pentaprism. Everything else around the camera has changed, of course, but ultimately the D810 is based on a film-era concept.

In contrast, Sony is the young upstart. It’s an electronics company that never had any interest in film, and only started making cameras with the transition to digital. However, it has now been making cameras for more than 15 years, and has therefore built up plenty of expertise (especially after acquiring Konica Minolta in 2006). And while the Alpha 7R may look superficially like a DSLR, it’s entirely a product of the digital age, with full-time electronic viewing and a strong emphasis on video. 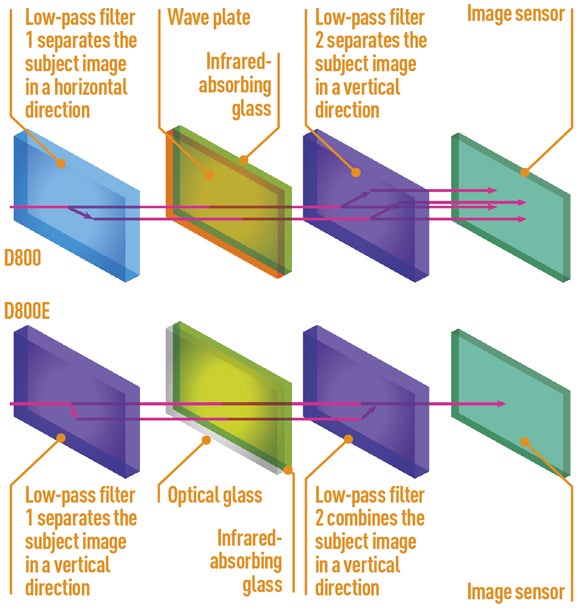 There has been a trend recently for camera manufacturers to remove the optical low-pass filters (OLPFs) from cameras, with Nikon leading the charge. To understand why this is occurring, we need to know what these filters do.

The OLPF slightly blurs the image projected by the lens onto the sensor, to remove any details that are finer than the sensor is capable of recording correctly, otherwise the image will be prone to various artefacts (aliasing and moiré). Aliasing occurs when fine details are interpreted in an incorrect way, often resembling a maze pattern. Moiré refers to the bands of false colour that can occur in images with fine repeating patterns, such as fabrics or brickwork.

However, with increasing pixel counts there comes a point where the benefits of the OLPF diminish. This is because various forms of image blurring, including unavoidable lens optical aberrations, serve much the same purpose. If the lens can’t resolve enough detail to induce these artefacts in the first place, there’s no point in blurring an already imperfect image further.

An optical low-pass filter consists of a thin layer of lithium niobate, which splits light rays into two according to its polarisation (known as birefringence). The degree of separation of the resulting rays is defined by the thickness of the layer.

In most cameras the light is passed through two layers, one that splits the light rays vertically with the second splitting them again horizontally, to give slight (but controlled) blurring. The stronger the effect, the lower the risk of moiré, but this comes at the expense of image detail.

With the D800E, the OLPF is ‘cancelled’. This is because the D800E exploits a strange property of birefringence: light rays that have been split according to polarisation can be almost perfectly recombined using a second filter of the same thickness, but orientated in the opposite direction. On the D800E, the first stage of the OLPF splits the light rays into two, and the second stage puts them back together again.

This has allowed Nikon to produce the D800 and D800E, with the only change between them being the front stage of the OLPF. Nikon could then test whether photographers would accept cameras without OLPFs. As both models have been replaced by the OLPF-free D810, the D800E probably sold better than expected.