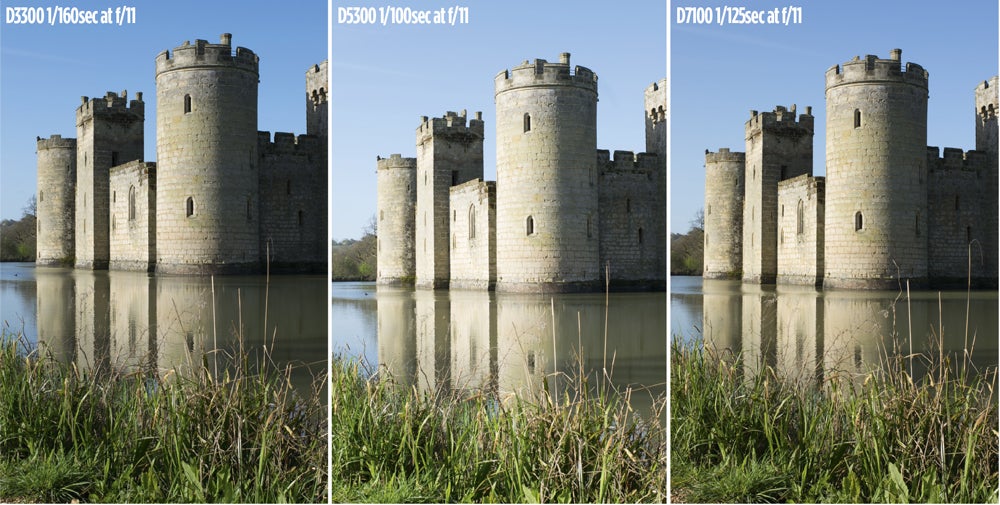 Whereas the D3300 features a 420-pixel RGB sensor, the D5300 and D7100 rely on a 2016-pixel RGB sensor metering system. To uncover if there were any obvious differences between the systems, we set each camera to its matrix metering mode, which works by gathering information from the RGB sensor and factoring in distance information provided by the lens to calculate accurate exposure.

Interestingly, in use we found the D3300‘s metering system produced images that were around 1/3EV-2/3EV darker than those produced by the D7100 and D5300 when shooting high-contrast scenes where subjects were illuminated by sunlight.

Thankfully, this exposure difference wasn’t at the cost of underexposure, and unlike the D5300 and D7100, which occasionally benefited from -0.3 to -0.7EV exposure compensation, the exposures produced by the D3300 were hard to knock and required minor adjustment.

Taking several more shots in similar lighting conditions supported our findings. Even when shooting towards the sun through a stand of trees, the D3300 handled the scene best, capturing an image that required less work with the highlights slider in Camera Raw to recover detail from burnt-out areas. 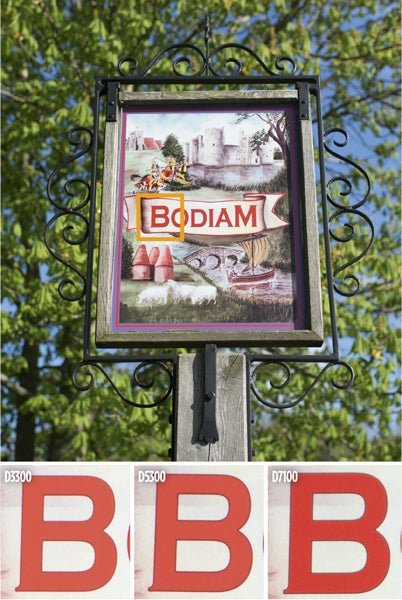 The D3300, D5300 and D7100 put in a comparable detail performance on test. To guarantee our resolution testing was comparative and fair, we connected each body to one of the best prime lenses in the Nikon system – the Nikkor AF-S 35mm f/1.4, which is equivalent to 52.5mm when the 1.5x crop factor is taken into consideration.

With this premium optic attached and each camera set to shoot in the uncompressed raw format, all three resolved an impressive 32 lines per millimetre (lpmm) at ISO 100. Readouts at higher sensitivities were also consistent, with 28lpmm being resolved at ISO 1600 and up to 26lpmm being made out at ISO 12,800.

These resolution test results confirm our initial prediction that there’s no detail advantage to be had from choosing the more expensive D7100 over the D3300 or D5300, but can the same be said for the way each camera handles noise?

As to be expected, clean, noise-free results are produced by each camera between ISO 100 and 400, and it’s not until ISO 800 is reached that the first signs of luminance noise start to become obvious in raw files when they’re inspected at close magnification.

Pushing up to ISO 1600 revealed an comparable level of luminance noise, although in our test images at higher sensitivities we discovered that the D3300 and D5300 are slightly less prone to colour noise compared to the D7100 – something we put down to the newer sensor working more effectively with Nikon’s latest Expeed 4 image processor.

On a day-to-day basis, the limit to which we’d be willing to push the sensitivity is ISO 3200, although acceptable results are also achievable on all three cameras at ISO 6400, and ISO 12,800 at a push, after noise reduction is applied.

Prior to testing dynamic range, we asked Nikon whether the sensor used in the D7100 is different from the one in the D3300 and D5300. While the company confirmed that the sensor is different, it was not willing to state whether the D3300 shares the same 24.2-million-pixel sensor as the D5300. We’re left to assume that they do, based on near-identical dynamic-range readouts.

As the graph above shows, the dynamic range of all three cameras is similar, despite the fact the D3300 and D5300 feature a revised sensor to the D7100. At the lowest and highest sensitivities, the D7100 appears, on paper, to have the edge over the D3300 and D5300, although it is a very small margin. The D5300 has the best performance between ISO 800 and ISO 1600, but the figures at these two settings are within a margin of error.

Readouts at around the 12EV mark at a camera’s base ISO reveals an excellent performance. The wide dynamic range of these three models will be well received by photographers who like to squeeze out a high level of detail from bright highlights and dark shadows. 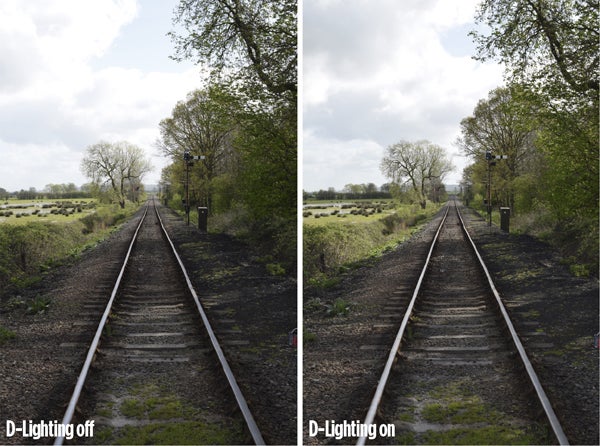 Included on all three DSLRs is Active D-Lighting – a mode that can be used to brighten dark tones and darken the brightest areas in an image to ensure that more detail is visible across a broad tonal range. This mode comes into its own in high-contrast scenes at risk of blown-out highlights or a loss of detail in the darkest shadows.

Active D-Lighting is found in the shooting menu, but whereas the D5300 and D7100 offer precise control with a selection of low, normal, high, extra high and auto settings, Active D-Lighting on the D3300 is much more basic, only allowing the feature to be turned on or off.

As the human eye is capable of seeing more detail in the shadows than in the highlights, most dynamic range optimisation systems are calibrated towards extracting more detail from the darker parts of the image.

Nikon’s Active D-Lighting system is no different, and while D3300 users will typically find themselves leaving Active D-Lighting permanently switched on for the best results, D5300 and D7100 users should set Active D-Lighting to normal for day-to-day use and manually adjust it to high or extra high in extreme conditions for a broader tonal range.