Rather than using the E-M5’s TruePic VI image engine, the E-M1 benefits from a refreshed TruePic VII processor that gives it a speed advantage. Whereas the E-M5 is capable of shooting full resolution images at up to 9fps, the E-M1 goes one better – quite literally. A continuous burst of 10fps puts it right up there as one of the fastest mirrorless cameras on the market and gives it a significant advantage over some DSLRs that struggle to beat the 6fps barrier with their more complex internal mechanisms.

Note the mode dial to the left of the EVF on the OM-D E-M5.

In regard to shutter speed, the OM-D E-M1 matches the maximum permitted speed offered by most DSLRs. Capable of shooting at up to 1/8000sec, this is an improvement on the OM-D E-M5’s 1/4000sec limit. At the opposite end of the shutter speed scale, both OM-D’s shoot as slow as 60secs, with the shutter speed adjustable in 1/3, 1/2. or 1 EV steps. 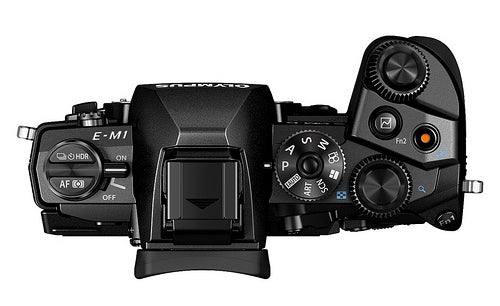 The OM-D E-M1 has a busy top plate design with direct access to continuous shooting, self timer, HDR, AF and metering modes from the buttons to the left of the EVF.