One of the key differences between the OM-D E-M5 and OM-D E-M1 are the sensors found inside. Whereas the Olympus OM-D E-M5 features a 16.1MP Live MOS sensor, the OM-D E-M1 uses an all-new 16.3MP Live MOS sensor that incorporates a New Dual Fast AF system with Phase Detection pixels on the sensor. The key point to pick out here are those newly added Phase-detection pixels that are aimed at delivering a faster AF performance to Olympus E-system users who may want to attach their lenses to the E-M1 using a specially developed E-system adapter – the MMF-3. 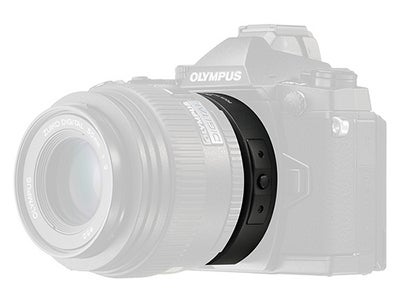 The MMF-3 adapter allows existing Olympus E-system users to attach and use their lenses.

So what about the sensitivity range? Well, the E-M1 doesn’t break any new territory in this area with the same ISO 200-25,600 span as the E-M5. What’s interesting to note here however is that the manufacturer claims the new 16MP chip can produce less noise than APS-C sized sensors – something we aim to find out when we subject the Olympus OM-D E-M1 to a full review in the forthcoming weeks. 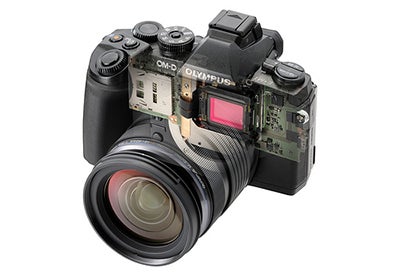 In all there are 81 focus area points on the E-M1 compared to 35 on the E-M5, with both cameras fully supporting single AF, continuous AF, single AF+MF, AF tracking and manual focus.