Studio tests indicate that the EOS 1000D has a wide dynamic range of around 8.5 stops, compared with the seven or so offered by the D60. Metering systems on both cameras perform well, though on occasion the 1000D does tend to overexpose a little when presented with darker conditions. By contrast, the Nikon D60 underexposes easier when presented with either highlights or just generally bright conditions.

Indoors, the 1000D’s AWB displayed very neutral results, with just a hint of magenta. By contrast, the D60’s can often turn up some rather warm results, often with a strong yellow or magenta cast (such as the image, right). 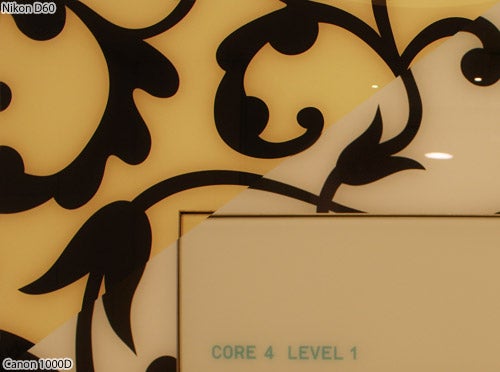 Both indoors and out, the D60 reproduces colours with a bit more pep than the EOS 1000D, with blue skies in particular showing greater depth and vibrancy.

Due to the differences in white balance, noise is generally more visible in images from the D60 under artificial light, where images tend to be a little darker due to the heavier cast. As the 1000D tends to err on the side of overexposure, outdoors, in contrasty conditions, its images show less noise than the D60. 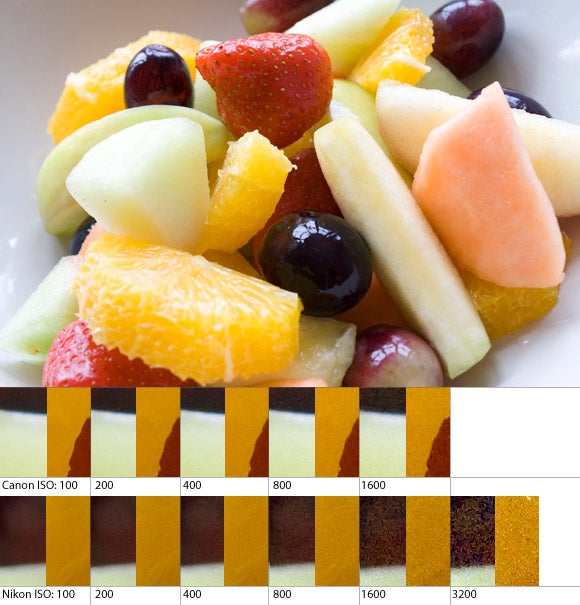 Noise from the D60 also tends to be of a finer grain than the 1000D’s, in comparison to the slightly more ‘blotchy’ patterning of the 1000D, though there is slightly more luminance noise in high-ISO images from the D60. The D60 begins to show both noise and noise-reduction effects earlier in the ISO range, and it’s more pronounced as you increase sensitivity.

Although I used a range of lenses on both 1000D and D60 bodies, I’ve biased my findings towards each camera’s respective kit lens, as their results are the most relevant to the entry-level user. Both lenses maintain good sharpness, though the effects of fringing were slightly more visible with Canon’s kit lens. 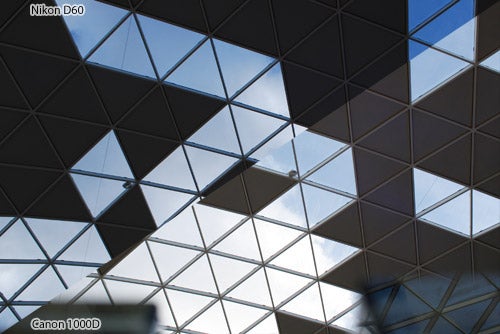 Barrel distortion is about equal with both lenses – being satisfactory by the standard of most kit lenses – while the image stabilisation of each lens worked well, too, with detail still reasonably sharp in images taken at around 1/4sec from each camera, at a focal length of 55mm. There is a noticeable dfference in quality with better lenses, though as kit lenses go both are generally good.

JPEGs from both the 1000D and D60 are a little soft compared with Raw files, though I found this to be the case with the 1000D to a slightly greater degree. Its JPEGs on occasion show a little more depth and contrast than Raw files, though what Raw converter you use will affect default results. JPEGs from the D60 are preferable to the 1000D’s, though it’s a shame that a version of Capture NX isn’t included with the body, as this really helps to get the best results out of the Raw files.

Trying to come to a conclusion between theCanon 1000D and Nikon D60 has caused me considerably more distress; whether to place one as a winner over the other or whether to have a winner at all. Every time I plumped for one model I would be reminded of the other’s plusses, and how where one camera may fall short in one area it would compensate in another. In essence, the question of whether one model is ‘better’ than the other is a superficial and only partially relevant one, particularly when both cameras perform to such a similar standard. Only the end user, together with their own working style, habits and preferences can decide which is the best model for them.

The fact is both the 1000D and D60 are equally excellent – they just do certain things differently. The small differences in image quality are far outweighed by how each model functions and the way they would be used by different photographers. The 1000D has the advantage of a more sophisticated focusing system, live view, and the inclusion of the DPP and EOS Utility software packages. The latter two points mean that the 1000D provides more room for growth, as the photographer becomes more creative and wants to experiment with either the practical uses for live view, tethering or post-processing. Yet, the D60 offers more features in-camera to experiment with and learn from, and provides a far better user experience. In fact, it’s hard to think of a camera better designed for the novice user.

So Canon 1000D vs Nikon D60 price war? – well, both are also excellent value at around £300-350. Overall, though, taking into account everything, the 1000D’s positive attributes means that it clinches it just by a whisker. While it lacks the ergonomics and styling of the D60, it goes that little bit further in terms of its specification and performance. Having been launched after the D60 – and arguably with the sole purpose of stealing some of Nikon’s entry-level thunder – it’s clear it has the upper hand, though both are fine DSLR choices in their own right.