Does the new KLYP improve upon the iPhone 4 model?

With the introduction of Manfrotto’s KLYP at the end of last year, which offered a continuous LED light for iPhone 4/4s users, it was inevitable that an updated KLYP accessory would quickly emerge for the iPhone 5. Cue the new KLYP, which in-keeping with its lack of name change appears to be very similar to its predecessor.

We reviewed the original product on its release and having spent some time with the iPhone 5 KLYP my experience has been eerily similar. The product itself comes neatly packaged into several separate parts including the LED itself, the housing case and the several adaptors. 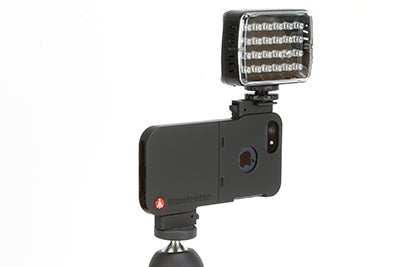 Having not had the pleasure of assembling the previous KLYP it took several minutes to piece together completely, which as stated in our previous review is not ideal for shots in which speed is essential. Gone is the bundled tripod that came with most versions of the original, and in its place is the option of attaching a tripod (such as Manfrotto’s PIXI) via the adaptor.

This is an unnecessary addition however and is not practical for the majority of the shots you will be taking with the KLYP. Having attached the PIXI to the KLYP setup, the result is highly unbalanced with the LED being positioned completely opposite to the tripod, making it disastrous to attempt to balance and making hand-holding a must.

The case itself has been redesigned somewhat, being made of rigid polycarbonate which should improve its resistance to damage. The material offers a silky smooth appearance and feel but still retains the robust and sleek look to better coincide with the iPhone 5’s style. Whilst the case doesn’t hinder any functions, it cannot be recommended as a permanent case, due to being easily detachable into its two separate pieces, and its thin material not offering a suitable level of protection.

The main new feature for this edition is the support of the “KLYPAPP” available from the app store for both versions of KLYP which claims to work in cohesion with the LED to produce brighter clearer images even for video. The promotional video promoting the app however is almost comical presenting several individuals, wielding the KLYP and tripod whilst attempting to dance within a low-light club environment.

The ridiculous nature is apparent immediately and brings into question the true logistical uses for the product. Especially when the light given off from the LED is not adequate to produce crisp images within truly dark areas. Other features include the red-eye remover and the ability to “clap your hands to be in the picture” which may be wishful thinking given the level of visual and audio distortion likely to be encountered. The app itself may prove useful though in combatting the harsh lighting the LED produces.

The LED remains almost identical to the iPhone 4 version, being powered by 2 x AAA batteries which do not come included, which would be expected given the £79.95 price tag for the bundle including the LED. The method for attaching the LED to the phone is a relatively simple process by tightening two rings which seem to hold it fairly securely.

Whilst the batteries added to the weight greatly, it ensures that your phone battery won’t be drained. There is a small dial located on the left of the LED which controls the intensity of the brightness, ranging from mildly dim to very bright, which would be greatly accentuated in a darker area. There are small icons on the dial showing the types of lighting for each intensity, however you’ll have to judge each scene individually.

One of the major elements of the KLYP LED that remains unchanged is its inability to swivel or tilt, meaning that the light must always be pointed directly at your chosen subject, resulting in occasional harsh lighting, although is useful for video in which a source of strong light is a must.

Whilst not re-inventing the wheel with this new edition of the KLYP, Manfrotto are successfully capitalising upon the growing market for amateur photographers and filmmakers using the iPhone. The KLYP has gone mostly unchanged in this iteration, but it still remains an expensive option for lighting subjects at a close range in low lighting and can only be truly recommended if this scenario is a common occurrence. The ability to attach a tripod is a nice touch, but doesn’t necessarily work effectively when paired with the LED or fragile casing.