The world's first genuine 1:1 macro with a 180mm focal length

£1,499.00
Sigma’s new 180mm f/2.8 is the first such lens to offer a genuine 1:1 macro capability. It is also claimed to be highly corrected for chromatic aberration, astigmatism and geometric distortion. But is it worth its substantial £1500 price tag?

First impressions are good: the lens feels weighty but solid and well-balanced. It is finished in satin black with a broad focusing ring (which remains static in AF mode but permits full-time manual intervention). The lens sits nicely in the hand when supported on the platform of its removable tripod collar, causing the user’s thumb and forefinger to fall comfortably against the focusing ring.
Three slider switches are placed just in front of the tripod collar: in order, from top to bottom, the switches determine the focusing range, the focusing mode and the optical stabiliser’s activation. It is not really possible to adjust these switches without lowering the camera but that is unlikely to be a serious inconvenience except in the case of the optical stabiliser, which might have been better placed at the top of the column rather than the bottom.

Focusing is quick and quiet but there were occasions when the lens hunted in low light levels: it is precisely to limit the impact of this behaviour that a focusing range switch is provided and it is significant that the problem only became obtrusive when the lens was left set to full range.

As is befitting of such an imposing and top-quality product, Sigma’s 180mm f2.8 macro comes complete with a bespoke padded case and lens hoods for both full-frame and APS-C use. The hood is a little awkward to fit on account of its generous size and circular section, making grip and alignment rather fiddly. It is also virtually impossible to insert the lens cap when the hood is fitted and reversing the hood for storage both hides the focusing ring and hampers handling. The best answer is doubtless to leave the hood loose in the padded case until it is needed and to fit a skylight filter to protect the
front element.

It may seem as if a lot of negative points have been made about this lens but the truth is that none of them impacted on its usability or image quality during field testing. Everyday use was greatly aided by the optical stabiliser and in macro photography the tripod collar was a huge boon for mounting the lens close to its centre of gravity. In all cases, test images proved to be blisteringly sharp, beautifully rendered and completely free of chromatic aberration.

Technical testing confirmed these findings. The MTF curve remained above the critical 0.25 cycles-per-pixel threshold right across the aperture range and the figures were in excess of 0.3 cycles-per-pixel from f/2.8 down to almost f/16.

The high-contrast test target revealed no colour fringing and the only hint of chromatic aberration was to be found in a slight separation of the colour curves beyond f/8 that was purely numerical and completely invisible to the eye.

So to return to the question of price, raised at the start of this review, it is worth noting that although Nikon’s and Canon’s similar, but non-macro f/2.8 lenses can be obtained for less than £1000, when it comes to macros the situation is very different. Nikon offers a 200mm f/4 macro for just under £1500 but Canon’s 180mm f/3.5 is pushing £2000. Not only can neither of those lenses match the Sigma’s maximum aperture but also neither
incorporates any form of image stabilisation for non-macro use. (Macro use is
likely to be tripod mounted, when optical stabilisation is best switched off.) 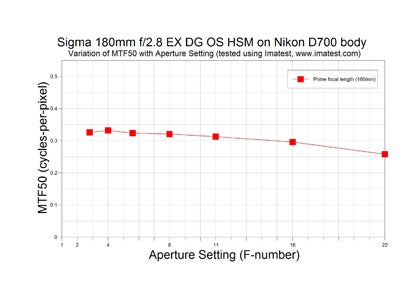 Sharpness is excellent across the full aperture range,
remaining above 0.25 cycles-per-pixel from f/2.8 to f/22.