Panasonic previously had both 14-42mm and 14-45mm zooms in
its lens range and has now added a second 14-42mm lens that eschews traditional
rotating collars in favour of electrically-driven focus and zoom mechanisms. As
a result, the new 14-42mm lens is considerably more compact than the
traditional version and is also around half the mass. On the other hand, it is
about 75% more expensive.

Protruding less than 3cm from the front of the camera, this
is such a compact zoom that the usual grip, where the camera body rests in the
user’s left palm with his/her fingers wrapped around the lens, cannot be
adopted. Instead the camera is best balanced between the base of the thumb and
curled third and little fingers that support the bottom of the body at its
right-hand end.

There is a theory that says CSC products are aimed more at
female photographers than males and certainly smaller hands, which are more
likely to be female hands, will probably be better proportioned for an
ultra-compact lens such as this.

When the lens is grasped as described, the power-zoom lever
falls naturally against the user’s left thumb and it takes only a small shift to
press the power-focus lever. Reaching the controls is therefore very easy but
learning to master them takes a bit more effort. The levers allow proportional
input, whereby a small displacement instigates slow movement and a firmer press
moves the lens quicker, but even so it can be tricky to frame scenes accurately
the first time of trying.

It is also worth noting that the 3cm length mentioned above
is only achieved when the lens has been energised: when the camera is
switched-off the zoom’s inner section is retracted and the lens shrinks to half
that length, making it even more compact for storage. But disconnecting the
zoom from the camera while the latter is powered-up leaves the lens fully
extended and potentially more exposed to possible damage.

Technical testing returned some very impressive results not
only in terms of sharpness but also in terms of chromatic aberration. For
apertures of f/11 and faster, the MTF curves for all three tested focal-lengths
remained above the critical 0.25 cycles-per-pixel threshold. Not only that but
also the lens test targets were almost totally devoid of colour fringing, which
is remarkable for a 3x standard zoom that can be purchased for under £300.

I have a gripe about the lens cap, which is too small and
fiddly for confident fitting and removal, but that is a minor point that will
be unlikely to bother many potential purchasers. And I never really got used to
the power-drive levers but that does not detract from the lovely images that
this lens produced. 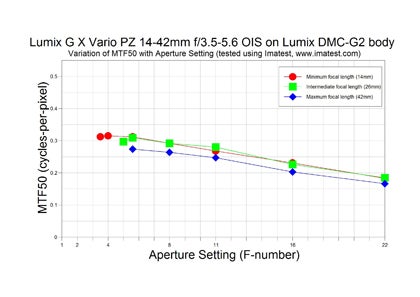 Although apertures wider than f/11 achieve better than 0.25
cycles-per-pixel at all focal lengths, there is a gradual decline in sharpness
at smaller apertures.