We take a look at Olympus' standard lens 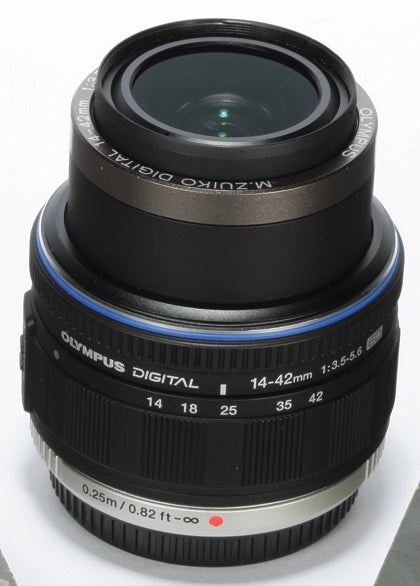 This is an ingenious lens that features a clever ‘parking’ system, making it much more compact when stowed than when in use. Olympus has achieved this by extending the rotation of the zoom ring to retract the middle of the three concentric cylindrical units, thereby reducing the overall length from about 75mm to just over 40mm.

Perhaps because of this collapsible design the innermost cylinder looks a little flimsy and there appears to be a little slack that is evident when fitting and removing the lens cap. There is also slight rotation of the front-most flange during focusing. This is unlikely to be a problem for either handling or filter movement but it is a bit disconcerting. These things give the camera-and-lens combination the air of a high-spec fixed-lens compact rather than that of a miniature SLR.

The zooming collar has a short throw and a smooth action but rotates the opposite way to that used by Lumix lenses, which is not ideal. Manual focusing is achieved using the narrow collar at the front of the outer barrel: this falls comfortably to hand when required.

The AF system works well but it is neither as quick nor as quiet as that installed in Lumix’s 14-45mm zoom. Olympus’s lens also loses out in lacking image stabilisation and has a marginally weaker set of MTF curves. Still, the resolution figures stay above 0.25 cycles-per-pixel across the aperture range down to about f/14 with just a slight drop wide-open at the 45mm setting.

The most serious weakness is magenta fringing, especially at 14mm, that is present when demanding subjects are photographed.  In its own right this is a good lens, but against the Lumix 14-45mm, which offers more features at almost the same price, it faces some very stiff competition. Some buyers will be swayed by its compact form, lower mass and clever ‘parking’ system but objectively it has to take second place behind Panasonic’s better-equipped zoom.