With a nearly 11x zoom range this brand new addition to Nikon's line-up is clearly worthy of serious attention...

* Quick and quiet IF

With a nearly 11x zoom range this brand new addition to
Nikon’s line-up is clearly worthy of serious attention but when you note that
the lens offers full-frame coverage and is available for comfortably under £800
it becomes an even more attractive proposition.

The bad news is that the maximum aperture starts at f/3.5
for 28mm and decreases steadily to f/5.6 to 300mm. That is not a serious
problem in terms of low-light use because the lens benefits from Nikon’s dual-mode
vibration reduction (VR-II) technology, which is claimed to allow the use of
exposure times that are up to four times longer than would otherwise be
possible. This equates to a two-stop gain in light-gathering power, so the lens
could be considered to have a maximum aperture setting equivalent to f/1.8-2.8
on a non-VR lens.

But maximum apertures influence creative as well as
technical factors and nothing can compensate for the loss of control over
depth-of-field that a genuine wide-aperture lens would offer.

That point aside, almost everything else about this lens is
good news. In particular, no chromatic aberration was detected at all during
technical testing.

The lens has a distinctly chunky feel but is very easy to
hold. A wide zoom ring dominates the front half of the barrel, turning through
about 100 degrees across the full focal-length range. A narrower focussing ring
sits to the rear, separated by a focussed-distance window, behind which reside
sliders to choose manual-only focussing and to activate and select the VR
system’s mode of operation. A lens pouch and a petal-type lens hood are both
provided, the latter completely obstructing the zoom ring when reversed for
storage.

Automatic focusing is quick and quiet thanks to Nikon’s
Silent Wave Motor technology, which is now starting to appear even within inexpensive
lenses such as this one. Focussing is internal, meaning that the
manual-focussing ring remains stationary in AF mode but manual adjustments can
still be made at any time if so desired. The MF ring is rather on the small
side and also slightly too far to the rear of the lens for this to be a
comfortable operation but AF performance is good enough for manual
interventions to be a rarity rather than a common occurrence.

Technical testing revealed a good set of MTF curves that
remained above the critical 0.25 cycles-per-pixel threshold for most
focal-length settings and most apertures. The significant exception was
wide-apertures at 28mm but this is unlikely to be an especially popular
combination. For the most common apertures, at all focal-lengths, the MTF
figures were reassuringly good for such a versatile and keenly-priced lens. 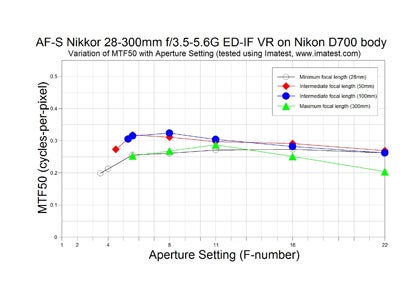 This is a good set of MTF curves that is weakened only by
the zoom’s performance at its extreme settings – at wide apertures for 28mm and
at small apertures for 300mm.