£895.00
Canon users who cannot afford to spend around £2,300 on the latest 24-70mm f/2.8L II USM lens might find solace in the fact that for much less they can buy a wider-range zoom with the same pro-spec pedigree. Admittedly the 24-105mm is an f/4 lens but it benefits from Image Stabilisation, which more than offsets the lack of a wider aperture in respect of exposure.

The 24-105mm L-series zoom feels exceptionally solid and robustly built. It nestles comfortably in the hand and offers just the right amount of resistance on both the zoom ring and the manual-focusing ring. The manual-focusing ring is to the fore with the zoom ring to the rear, which puts the latter slightly out of reach when adopting the firmest grip.

The focusing ring remains stationary in AF mode and manual adjustments can be applied at any time. Automatic focusing is brisk and quiet. Zooming is external but the extension is very modest.
A focused-distance window separates the two rings and is additionally marked with infrared focusing indices for 50mm, 35mm and 24mm. Under the window are two sliders that set the focusing mode and the IS system. Image stabilisation betrays itself through just the faintest hum and a slight jarring of the image as the stabilisation system settles.

The lens also carries on its barrel, though not in its model number, a “macro” label. Yet the maximum achievable reproduction is just 0.23x, which falls a long way short of the 1:1 ratio needed for true macro.

Technical testing revealed a near-total absence of chromatic aberration. There was a faint hint of colour fringing at 24mm but nothing at all once the lens was shifted away from its minimum focal length.

Image sharpness proved very impressive for a lens that was designed about eight years ago, well before the advent of high-resolution digital sensors. MTF curves were plotted for four focal lengths and were above the critical 0.25 cycles-per-pixel level for almost every measurement made: only wide-open at the longer focal lengths was a slight weakness recorded. 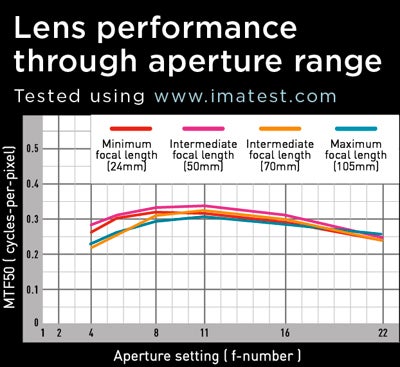 This is a strong set of curves that rise above 0.3 cycles-per-pixel for every focal length setting tested. Performance wide-open at longer focal lengths is a shade weaker but not to any serious extent.

There is nothing serious to criticise other than minor vignetting in the corners at 24mm. Given the model’s age and professional appeal, some secondhand examples may have endured heavy use but it is likely that there will be give-away signs on the outside of the barrel. Fine examples, such as the lens tested here, are as capable on the latest digital bodies as they were on film cameras.
Early examples of the lens (with identifiers that start UT followed by numbers under 1,000) could suffer from ghosting in contre-jour conditions but Canon introduced a free repair for this in November 2005.

Overall, this is an excellent lens that is keenly priced and very versatile. Some users might mourn the zoom’s lack of a wider aperture but all others will appreciate its perfect balance of features and value for money.