Sony has stated that it sought to improve on the ergonomics of the A55, and a side by side comparison shows the new model as one targetted at a more enthusiast audience. The more substantial grip with depressions for both middle and ring fingers should easily accommodate hands of all sizes, while there’s ample thumb space on the rear in between the various controls. It’s also welcome to see the controls which were positioned on a slope between the rear and top-plate on the A55 are now more conveniently facing the user at a steeper and more comfortable angle. 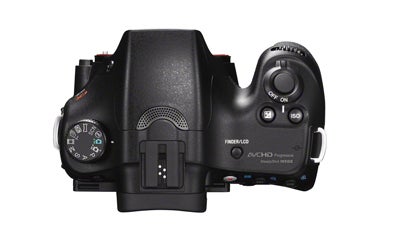 The quality of the camera’s construction is more than satisfactory, and in line with other cameras around this price point, such as Nikon’s D5100 and Canon’s EOS 600D. As regards button and control positioning, there’s little to dislike: the mode dial is sufficiently tall and its side tactile for easy operation, while the command dial also protrudes out far enough to be easily turned. The only gripe here concerns the power collar around the shutter release button, which would benefit from being more distinct, either in size or texture. 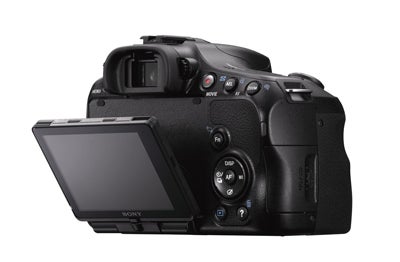 All buttons are clearly labelled in either white or blue text, and aside from the lesser-used ‘?’ control, all press positively into the camera. Digging around the menu reveals that many of these can have their functions customised to taste, which helps if you find yourself dissatisfied with the default set-up. Admittedly, the camera isn’t as laden with buttons as other models, and there’s ample space on the top plate for a further control of some kind – nevertheless, anything important which doesn’t fall to hand can be quickly accessed through the ‘Fn’ control.