The K30 is available in a variety of different bundles, including a body only version that’ll set you back £599. This puts it in the same price league as the Panasonic Lumix G5 and works out at roughly £100 less than Canon’s recently launched EOS 650D. Other rivalry includes Nikon’s D3200 and Sony’s A57, both of which are cheaper alternatives to the K30, costing £489 and £519 respectively in body only form. Bundled with the standard 18-55mm DA L kit lens, the K30 can be picked up for £649. It’s worth noting however that this lens is not designed to be weather resistant so if you’d like to take full advantage of the K30’s weather resistant capabilities you’ll want to choose it with the 18-55mm DA WR lens that is water-resistant, cold-proof and dustproof. 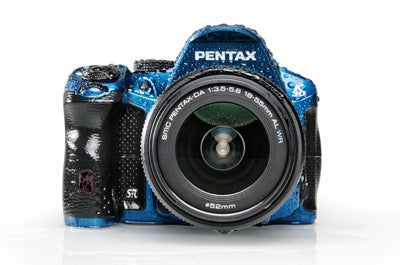 The cost difference between the non-WR and WR lens is £30, which brings the price of the K30 with the 18-55mm DA WR lens up to £679. This does place it at the expensive end of the mid-range DSLR scale, especially when you consider the K5 (Pentax’s current semi-pro model) can be picked up for £693 (body only) or £729 with the 18-55mm WR lens. It doesn’t feel like you’re getting any less on the K30 than on the K5, making it a viable alternative for those who’ve might have thought about purchasing a K5 but have previously been put off by price. With so many crossovers between the K30 and K5 it also suggests that a K5 replacement could well be on the way, possibly at Photokina 2012.   If you’d prefer a more versatile focal length than a 18-55mm standard zoom, Pentax has also bundled the K30 with the 18-135mm WR lens. This bundle costs £929 and gives you a focal length that’s equivalent to 27-202mm.

A new Pentax release wouldn’t be complete without a selection of different coloured models being offered. The K30 is available in black white and blue. Prior to this review going live Pentax sent us sample of the blue version as we were curious to find out what it would look like in the flesh. We were very impressed by it and thought the cool colour reflects the cameras water resistant capabilities. 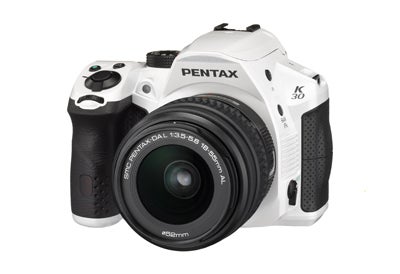