The Pentax K-3, an interchangeable lens DSLR, is the new flagship model of the K-series, combining existing traits of the previous models in the series with a hefty number of new features.

Chief among the improvements is the new CMOS sensor, manufactured by Sony, which offers 24 effective megapixels of resolution.

One unique feature of the camera is its original new shake reduction (SR) mechanism, which uses an SR-dedicated servo controller to compensate for camera-shake when used in conjunction with any Pentax lens.

The SR unit also functions as the world’s first anti-aliasing simulator, designed to reduce moiré effect at the same level as an anti-aliasing filter. It works by applying microscopic (sub-pixel level) vibrations to the image sensor during exposure.

This means that, unlike an anti-aliasing filter, it can be switched on and off and its level can be altered, allowing the user to increase the intensity of the compensation when shooting a moiré-prone subject such as striped clothing.

The K-3 also sports a new Prime III imaging engine, a newly designed optical viewfinder with a near-100% field of view, and a new SAFOX 11 AF module.

The new SAFOX 11, the successor to the SAFOX X, expands its coverage by increasing the number of AF points to 27. The central sensors are designed to detect the light flux of an f/2.8 lens, which will streamline focusing when used with a wide-aperture lens. 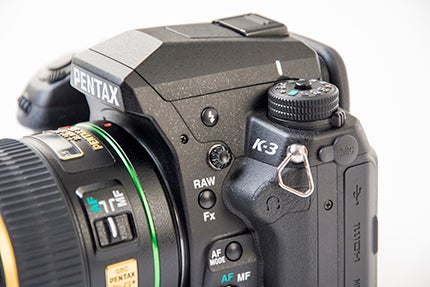 The AF system also sports zone-focusing, whcih selects the best focal point within a nine-sensor zone, and a face detection system that is capable of identifying as many as 16 faces simultaneously.

The K-3 is fast too, capable of high-speed continuous shooting of 8.3 images-per-second. The startup time lag is approximately 0.3 seconds.

A new RGB light-metering sensor with approximately 86,000 dots allows for what Pentax is calling a ‘Real-Time Scene Analysis System’. This system uses data gathered by the light metering sensor to refine accuracy of auto-exposure and white balance. Pentax says this system will also be able to distinguish more accuartely between main subject and background and thus provide more accurate flash discharge.

The K-3 comes with a high-resolution 3.2-inch LCD monitor with approximately 1,030,000 dots of resolution. The LCD screen is non-articulated and is not touchscreen-enabled. Pentax says this was to keep both the bulk and cost of the camera down to manageable levels. 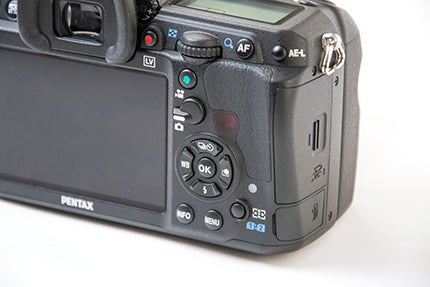 Image: The rear screen and controls of the K-3

Movie shooting has been upgraded for the K-3. The camera records MPEG-4 AVC/H.264 movies and 4k-resolution movie clips in Motion JPEG (format AVI). Exposure settings can be adjusted during movie recording, and AF can be altered mid-recording by simply tapping the AF button.

Pentax has also released some new accessories that are specifically compatible with the K-3: the exclusive D-BG5 battery grip featuring an extra set of buttons, the O-ST1401 camera strap and the O-FC1 Flu Card for Pentax 16GB.

The O-FC1 is a memory card to connect camera and smartphone. When placed in the second of the camera’s dual slots, the card’s wi-fi connectivity allows the user use a phone to see the live-view, control shutter release, adjust focus, set aperture and view captured images.

The camera retains the solid build of the K-5, with a lightweight
magnesium alloy and 92 sealing parts for weather and dust-proofing. Pentax says the camera will be able to operate in temperatures as low as -10ºC. A limited premium silver edition will also be released in addition to the standard black model. 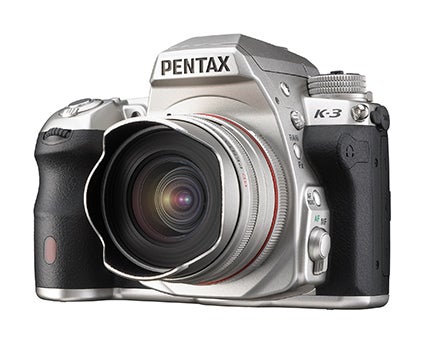 Image: Just 2000 units of the silver edition are set to be produced and released. Its specs are the same as the black model