Amongst the plethora of new cameras to be unveiled at the 2014 Consumer Electronics Show is the Nikon D3300 – an entry level DSLR that sits above the Nikon D3200 and D3100 in the manufacturers lineup.

One of the key talking points is the inclusion of Nikon’s latest EXPEED 4 image processor that we first witnessed inside the Nikon D5300 a few months ago. The improvement this brings is an updated ISO range and faster continuous shooting – something that has been the case in each new release of a Nikon D3000 series camera since the launch of the D3100 in August 2010.

WDC Reviews Editor Michael Topham managed to get his hands on one of the first samples of the Nikon D3300, so read on to find out what he makes of this latest entry level DSLR. 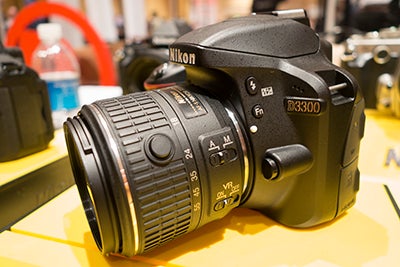 Two areas that I thought might have seen enhancement on the Nikon D3300 remain much the same as its predecessor. Built-in Wi-fi is a given on most new camera releases today, however the D3300 continues to rely on Nikon’s WU-1a adapter to connect to a Wi-Fi network – a little surprising given that Nikon has recently included Wi-Fi built in on the new Nikon D5300.

One can only presume the price of featuring Wi-fi built in on the D3300 would have had an effect on the cost.

Secondly, the tried and tested 11-point autofocus system has also been carried over to the D3300. Having been used in two generations previously, I expected the Nikon D3300’s autofocus system to be more advanced, but that said the arrival of a new 18-55mm f/3.5-5.6 VR II kit lens looks to be an improvement, both in terms of its operation, size and portability.

During a visit to PepCom, Las Vegas (a media event that displays the latest innovations prior to the CES show), I visited Nikon’s stand where one D3300 was on show with the new 18-55mm f/3.5-5.6 VR II kit lens. 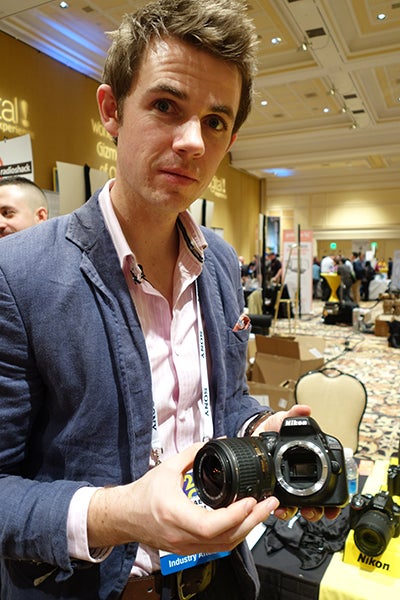 Getting hands on with the Nikon D3300 at the PepCom event held at The Mirage, CES, Las Vegas

The Nikon D3300 features a 24.2MP DX-format CMOS sensor, and while it may not seem any different to the Nikon D3200’s sensor on paper, it lacks an optical low-pass filter in an effort to preserve maximum image resolution and sharpness.

Without conducting our own resolution tests back in the studio we’re unable to comment on the output differences between the D3200 and the D3300 at this stage, but we’re expecting to see subtle improvements when images are viewed at close magnification.

The D3300 is the third DSLR to be equipped with Nikon’s EXPEED 4 image processor, the others include the Nikon D5300 and the recently announced Nikon D4S. The combination of the sensor and improved processor provides a wider ISO range than the Nikon D3200. 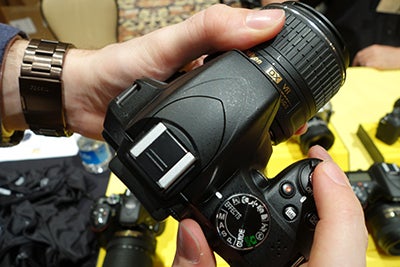 As for speed, the D3300 continues the trait in the D3000 series for being faster than its predecessor – another benefit of the new EXPEED 4 image processor. This makes the D3300 one of the fastest continuous shooting entry-level DSLRs on the market today and works out at 1fps faster than the Canon EOS 100D.

Although the D3300 shoots as quickly as the Nikon D5300, the latter still has the advantage when it comes to autofocus, with a more impressive 39-point AF system as opposed to the more basic 11-point AF system on the D3300 with a single cross-type point in the centre.

The 11-point Multi-CAM 1000 autofocus module features single-point AF, dynamic-area AF, auto-area AF, and Nikon’s clever 3D tracking, which can track a subject from AF point to AF point as it moves across the frame, utilising colour and distance information from the Nikon D3300’s 420-pixel RGB sensor.

There’s very little to report on the differences to the D3300’s viewfinder and screen as it adopts the same technology from the D3200. Like we’ve seen before, the D3300’s optical viewfinder displays 95% coverage and has a 0.85x magnification with dioptre control should you need to adjust it to meet your eyesight.

The rear screen remains the 3in, 921k-dot type as per the D3200, which was a significant improvement over the D3100‘s 230k-dot display. The wait for a Nikon DSLR to be fitted with a touchscreen continues, however it’s no surprise that by fitting one within an entry-level model would significantly increase the price to the consumer who may not feel it’s a necessity. 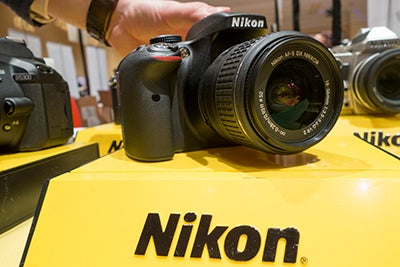 The Nikon D3300 is in every sense of the word a ‘compact’ DSLR. Though it may not be as petite as the Canon EOS 100D, it feels small in the hand compared to an enthusiast DSLR such as the Nikon D7100.

Being smaller is no bad thing however and the camera manages to shed weight thanks to carbon fibre being used in its construction process. Paired with the new 18-55mm f/3.5-5.6G VR II kit lens, the D3300 is claimed to be 30% smaller and 25% lighter according to Nikon and this is noticeable when it’s picked up and handled.

The sculpted handgrip makes the D3300 a comfortable camera to hold and even though I only held the camera in the hand for 30 minutes or so on the stand, I couldn’t find any faults in the way it operated or handled.

Those coming to the D3300 as an upgrade option from the D3000, D3100 or D3200 will feel right at home in terms of its size and the button arrangement has been intuitively laid out for speed and ease of operation.

The interface on the D3300 remains unchanged, however the information menu (accessed by hitting the ‘i’ button) now appears in an attractive light shade of blue. Full HD video at up to 60p with full time autofocus is supported and the inclusion of a 3.5mm microphone port means that Nikon users no longer have to pay additional expense towards a D5000 series of DSLR to get this feature, which was the case in the past. 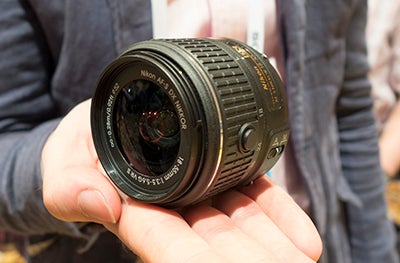 I’ve wanted to see a replacement to the original Nikon 18-55mm kit lens for quite some time, and first impressions of the 18-55mm f/3.5-5.6G VR II are very good indeed. It’s less bulky meaning it won’t take up as much room in your camera bag and it’s lighter which contributes to a less heavy body and lens combination.

Having to depress a button to extend the lens to 18mm and again to retract it to its ‘L’ position is much like the operation Nikon 1 owners have to do with their NIKKOR 1 lenses. It’s from here that Nikon’s engineers took their inspiration to make the kit lens more compact, while still offering the standard focal length of an 18-55mm kit lens.

The D3300 has a popup flash that raises spritely from the top of the body, and along with 13 in-camera effects to choose from there’s a Guide Mode to help beginners to a DSLR understand more about how it’s used and how to take advantage of the advanced functionality.

Although it’s somewhat disappointing that the D3300 doesn’t feature Wi-fi built in, users can purchase the Nikon WU-1a mobile adapter if they consider wireless image transfer and remote shooting to be important to their imaging. The snags here are the additional £49 expense and the way the adapter just out from the side of the body when it’s attached. 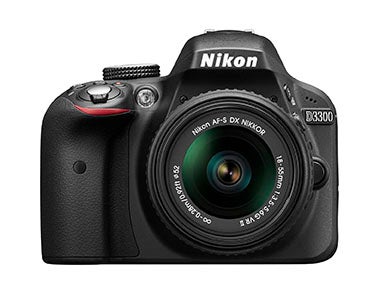 It’s fair to say the Nikon D3300 isn’t a groundbreaking release, but an update to the company’s entry-level range, which brings with it some of the latest advanced technology such as the EXPEED 4 image processing engine.

With the D3100 being such a popular and well respected DSLR for Nikon over the years, the D3300 has a hard act to follow, however the faster frame rate, higher resolution screen and 3.5mm mic port make it a good case for itself over the ageing D3100.

It’s difficult to tell what advantages the D3300 has over the D3200 in terms of image quality until we compare our image quality results, but there’s certainly not enough here to worry D3200 users about an upgrade, and if anything it’s likely to lower the price of the excellent Nikon D3200 to make it even more affordable.