Prior to the launch of the Canon EOS 70D, we visited Canon’s headquarters to find out more about the camera, and more specifically, how the new Dual Pixel CMOS AF technology works. Although the sample we laid our hands on was a pre-production model and may see minor revisions, it gave us a good idea of what to expect when the full production samples arrive at the end of August. 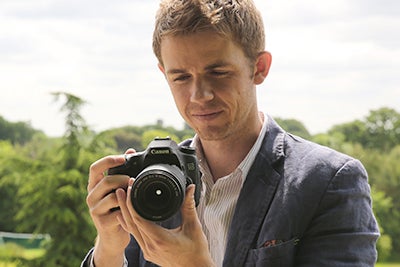 The first thing we noticed when we picked up the 70D is how familiar it feels in the hand to previous EOS models – most notably the EOS 60D. Little has changed in terms of the size of the body and the rear controls are laid out in a similar fashion to the recently announced EOS 700D. Unlike the Canon EOS 7D, which features a highly durable body that’s constructed from magnesium alloy, the Canon EOS 70D’s body is made from aluminum and polycarbonate resin with glass and conductive fibre.

Although we wouldn’t say the 70D feels any less robust than the EOS 7D, the build quality of the latter would undoubtedly be able to shake off heavier impacts and survive more demanding shooting situations thanks to its weather resistance.   Bulkier in the hand than the EOS 700D, the 70D feels slightly better balanced when it’s attached with larger lenses and offers more for you to wrap your hand around.

The advantage of the larger grip also benefits the 70D’s shooting stamina. Compared with the 700D, the 70D shoots approximately 480 more frames and also allows any 60D, 7D or 5D Mark III users to use any LP-E6 batteries that they may already own. 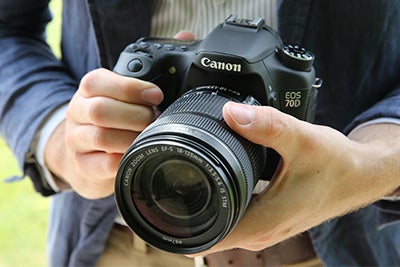 Keen to test how effective the Dual Pixel CMOS AF technology really is, we lined it up alongside the Canon EOS 5D Mark III before setting both cameras to Live View. Focusing between near and far subjects at the extended end of the zoom range clearly revealed differences in speed and how effective the introduction of Dual Pixel CMOS AF technology is going to be, not only for the EOS 70D, but for the future of Canon DSLRs.

In the past, the speed of AF in Live View has often slowed the speed at which photographers and videographers would like to work. Although we’d say the focusing speed isn’t as fast as when you’d compose through the viewfinder, it’s a huge improvement and makes the 5D Mark III’s Live View AF speed look sluggish by comparison.

Mounting two photodiodes within each pixel is clever technology indeed and seems to be the way forward from our brief hands-on session. Asking the question as to whether this technology could affect the quality of images in any way, Canon responded by saying ‘there will be no compromises in image quality.’ 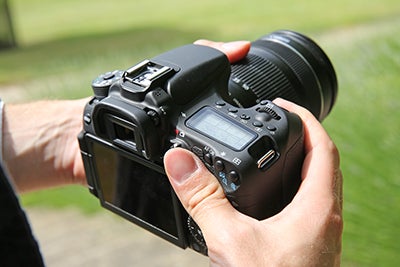 The new viewfinder graphics on the 70D also received a warm welcome during our brief hands-on. The new AF area button that’s located just behind the shutter button is easy to find with your index finger without having to pull your eye away from the viewfinder. It results in a much faster way to access to the 70D’s three AF area modes and saves you hunting through the menu or quick menu.

The electronic level icon that’s displayed in the viewfinder is also a useful addition for those concerned about getting their verticals and horizontals perpendicular.   As for the capacitive touchscreen, it operates in an identical way to the Canon 700D’s. Bright, vibrant images were displayed on the pre-production model, and though you might think it’s difficult to navigate through the menu with fairly small icons, it’s not at all. It remains one of the most responsive and sensitive touch screens we’ve used to date. 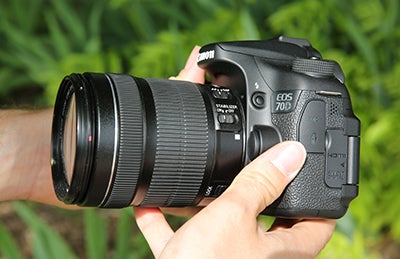 Overall then, our first impressions of the Canon EOS 70D are very positive. Given that the firmware is not yet final, there could be some further improvements and modifications, but from our first try we found very little to fault.

The main question many consumers will want answered is; why pay more for the 70D when the more advanced Canon EOS 7D is cheaper? Though the EOS 7D has a larger buffer, shoots 1fps faster and features a magnesium alloy body, the fact remains that it’s getting on for being four years old and doesn’t feature the very latest Dual Pixel CMOS AF technology that makes the 70D so special. Ok, the 70D may not be quite in the same league as the 7D in terms of build quality and performance, but nevertheless it gets extremely close to what the 7D offers and we expect it to fall below the asking price of a new 7D (£1079) very quickly after it goes on sale at the end of August.

What we can expect to remember the Canon 70D for in years to come is the way it transformed the speed of autofocus in Live View – something that’ll be very well received by both photographers and videographers.