Three months after refreshing their enthusiast range of DSLRs with the EOS 100D and 700D, Canon has announced the EOS 70D – a new model that’s designed to replace the EOS 60D and slots into the company’s advanced lineup of DSLRs.

Unlike DSLRs that sit below it in the EOS range, the Canon EOS 70D features a higher resolution 20.2MP APS-C CMOS sensor that’s partnered alongside Canon’s DIGIC 5 image processor and provides a wide ISO sensitivity range of 100-12800 that’s extendable to an equivalent of 25,600. 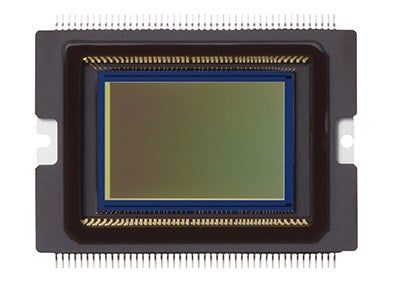 Implementing the same 19-point all cross-type AF system as found on the Canon EOS 7D, the Canon EOS 70D becomes the world’s first DSLR to feature Dual Pixel AF technology, which is designed to improve the speed of autofocus when shooting Full HD video and acquiring focus in Live View mode. This latest technological innovation allows two photodiodes to be mounted within each pixel, both of which can be read independently to achieve autofocus, or alternatively together for image capture. To ensure a perfect balance between image quality and performance is achieved, the Dual Pixel AF technology covers 80% of the sensor area and is fully compatible with 108 Canon EF and EF-S lenses. 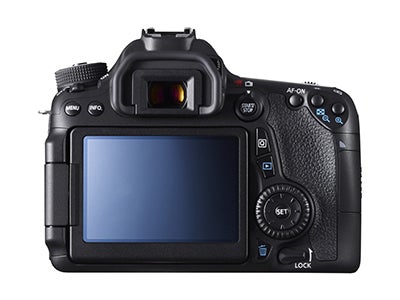 At the rear, the Canon EOS 70D shares a similar design to the recently launched Canon EOS 700D

To further enhance the autofocus operation, the Canon EOS 70D features a new dedicated AF area selection button that’s conveniently positioned behind the shutter. The idea of this is to tie-in with the EOS 70D’s intelligent viewfinder to provide a way of showing the autofocus modes without having to pull the camera away from the eye. Autofocus mode icons are displayed directly above the AF points in the viewfinder and after depressing the new AF area button, these can be toggled through using the top plate scroll dial. Compared to the EOS 7D’s 100% frame coverage, the Canon EOS 70D has 98% coverage and 0.95x magnification. 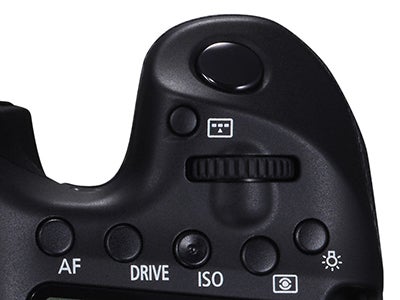 The new AF area selection button that’s located behind the shutter button offers a heads-up view of the AF modes through the viewfinder and is controlled with the scroll dial.

Set to continuous shooting, the Canon EOS 70D can rattle out a burst of high resolution images at 7fps – equivalent to 1fps faster than the Canon EOS 5D Mark III, but 1fps slower than the Canon EOS 7D. Loaded with an Ultra High Speed SDXC or SDHC memory card, Canon claim that 16 Raw files, or 65 large JPEGS, can be shot before the 70D’s buffer requires a breather before it can shoot again. 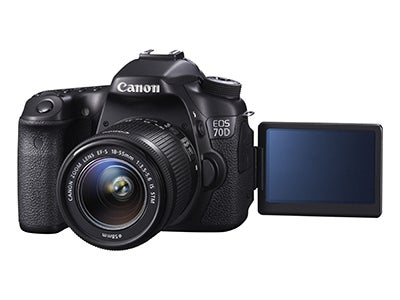 The rear of the EOS 70D is taken up by a 3in, 1040k-dot resolution touch screen that’s identical to the display as found on the recently launched EOS 700D. Being the Vari-angle type it can be pulled out, tilted and swiveled and has the advantage of being able to be touched to acquire focus in Live View mode or when shooting HD video. On the subject of HD video, the Canon EOS 70D shoots at a variety of frame rates, including 30,25,or 24fps, with the option to shoot at 60 and 50fps when the resolution is lowered to 720p. Full control over shutter speed, aperture and ISO is also available for videographers, as is a built-in external microphone input port. 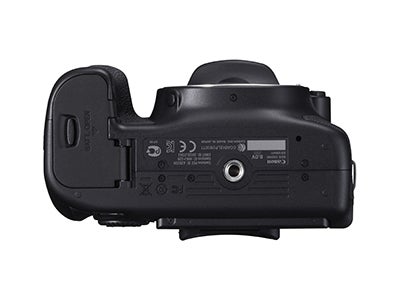 The Canon EOS 70D uses the rechargable Li-ion LP-E6 battery and has a battery stamina that’ll last for 920 shots.

Much like the Canon EOS 6D, the EOS 70D becomes Canon’s second DSLR to feature in-built Wi-fi functionality. It offers photographers the freedom to control the camera remotely from a smart phone or tablet that’s running Canon’s EOS remote app. In addition to its wireless functionality, the Canon EOS 70D features a host of creative modes, which allow photographers to experiment with the style and appearance of images prior to sharing or uploading. 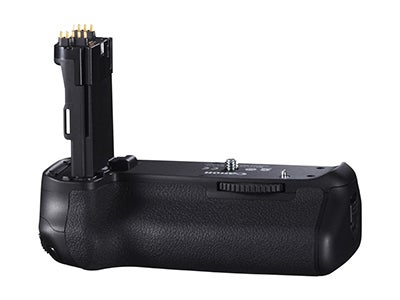 The new BG-E14 battery grip has been designed for the EOS 70D and doubles the shooting stamina by holding a pair of rechargable Li-ion LP-E6 batteries.

Read our first impressions of the camera in our Canon EOS 70D hands on preview.