The most noticeable change to the NEX-5R’s design is found on the top plate with the on/off button now surrounding the shutter button. This makes it easier to turn on and operate in a moments notice. As well as being able to record HD video (1920×1080) using the dedicated button on the top plate, there’s an all-new control dial on the corner of the body. Identical to the type of control dials you’d find on Sony’s NEX-7, the new dial can be used to control a variety of functions and offers very precise control when setting shutter speed or aperture values. As we found out when using the camera, the new dial comes into its own when you’d like to cycle through the shooting modes and it makes for a more comfortable and faster way of controlling camera settings than using the d-pad at the rear of the camera.

Playback of images is also controlled from the top plate. Hitting the playback button while in playback mode will take you directly back to shooting mode or alternatively you can half depress the shutter just like you would on a DSLR. Reviewing images has been made faster too, again courtesy of the new corner control dial. The function button to the right of the shutter button is also a new addition. It’s handy for quickly switching between AF/MF, changing autofocus mode, switching autofocus area, adjusting white balance, setting the metering mode or adjusting creative style effects when used in combination with the d-pad.

As for the menu itself, little has changed in terms of its appearance. There are now seven options – Shoot Mode, Camera, Image Size, Brightness/Colour, Playback, Application and Setup. Just like before though it’s not always easy to find the setting you want in a hurry and you can be left searching for a few seconds. The touch screen makes for an alternative way of navigating the menu, however on occasions we found ourselves accidentally returning to the main menu rather than scrolling through the different options available within each sub menu.

While on the topic of the touch screen, some of the on screen icons such as the menu, mode and touch shutter are incredibly small. This makes it difficult to select what you want if you have large fingers. You can alternatively use the buttons alongside the screen at the top and bottom, but we’d prefer to see larger onscreen icons to make using the touch screen a more enjoyable experience. We also noticed in playback mode that it’s not uncommon to accidentally zoom into an image when you’re attempting to swipe left or right to the next image which became frustrating over time. 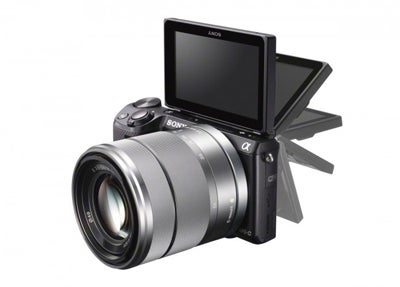 Without a built-in flash and no standard hotshoe fitting, Sony has once again included the ‘Smart Accessory Terminal’ for attaching an external flash unit to the top plate. A flash is included in the box as standard but this doesn’t get you away from the hassle of having to physically attach and detach a flash each and every time you’d like to illuminate a subject. Just like the NEX-5N, the supplied flash has a guide number of 7 so it’s not a particularly bright offering and takes its power directly from the camera.