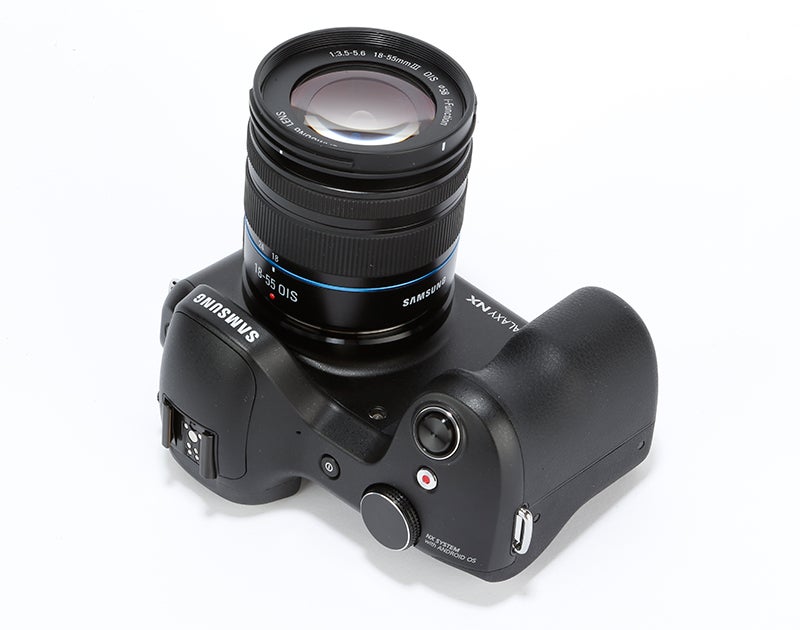 The design of the Samsung Galaxy NX shares likenesses to previous flagship NX-series models. The front looks similar to the NX20, but when you pick it up you do notice it’s more like a NX20 on steroids in terms of its size. Lean but with a chunky grip, the Galaxy NX provides more to wrap your hand around – something that’s been done to improve handling but to also accommodate a larger battery to help power the huge screen and Android operating system.

The result is the Galaxy NX’s weighs 495g and feels both super-solid and refined in the hand.   What takes some getting used to is the lack of buttons at the rear where the screen takes precedence. The rubberised corner of the body offers a comfortable place for the thumb to rest, but we’d prefer the on/off button to be positioned around the shutter for instant operation rather than on the top plate.

The single mode dial drives many of the cameras functions as well as adjusting volume in Android mode. It’s also used to switch shooting mode or adjust exposure and ISO parameters after the iFn button has been used on the lens. 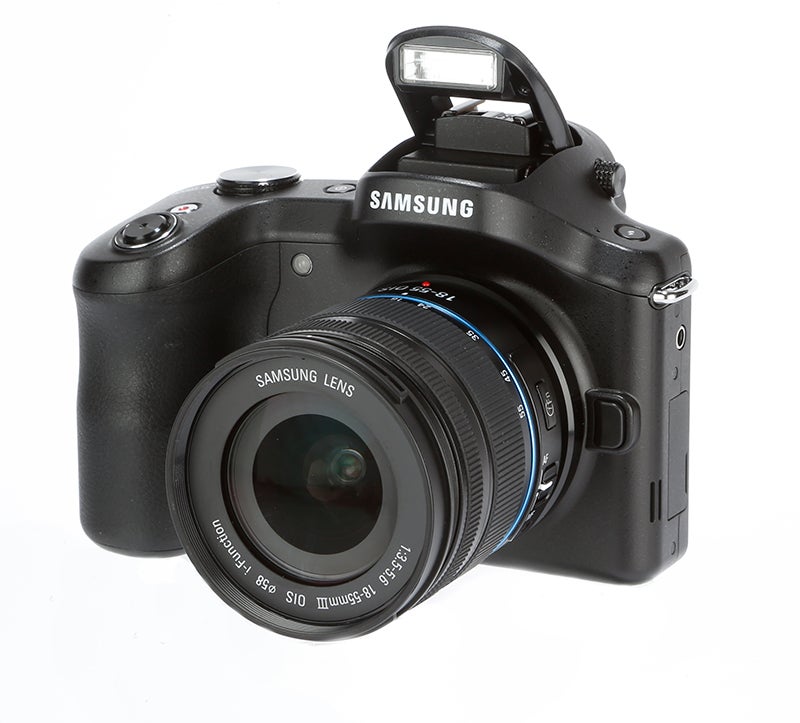 To the side of the Galaxy NX’s EVF there’s dioptre control and to the left of this is a button to raise the pop up flash. In total there are just four buttons on the body, but thankfully the layout of the touch buttons and options onscreen are clear and don’t make it a daunting place for novices who might not be used to operating a camera in this way.

Switching between the Galaxy NX’s shooting mode and the Android main menu takes no longer than a second, and we also discovered a shortcut for this – simply depress and hold in the scroll dial.

In Aperture Priority, Shutter Priority and Manual modes it takes some time to get used to pushing in the scroll dial before any variables can be changed. We did experience times when we accidently changed the shooting mode rather than the exposure settings.

After the shooting mode has been selected it would be great if the camera could recognise this and then let you adjust variables instantly. One other observation is that the EVF obstructs the shutter speed and aperture values when you’re shooting at low angles. To get around this it would be better if they were offset to the right where there’s plenty of space on screen.

Although the Galaxy NX’s thin body and chunky handgrip might not make it the most aesthetically pleasing camera to look at, it feels nicely balanced in the hand with the 18-55mm kit lens attached. The quality of the build is in a different league to NX-series CSCs that have rolled off the Samsung production line before and it’s refreshing to see the manufacturer venturing away from plastic for a more premium and desirable finish.