The K-01 is designed by acclaimed designer Marc Newson. To some this is a big deal, to others it’ll leave blank faces. WDC’s take isn’t to assess who it’s designed by, but how it’s designed. From our point of view we’re somewhat baffled. The K-01 is almost as big as a DSLR, boxy, lacks a defined grip, and there’s no provision for a viewfinder. In short: The K-01 removes the defining part of a DSLR’s design, mimics a Compact System Camera design, albeit without the ‘Compact’ part, but doesn’t add anything new. Its one key sell is the unusual design – and that’s already divided the public’s opinion. 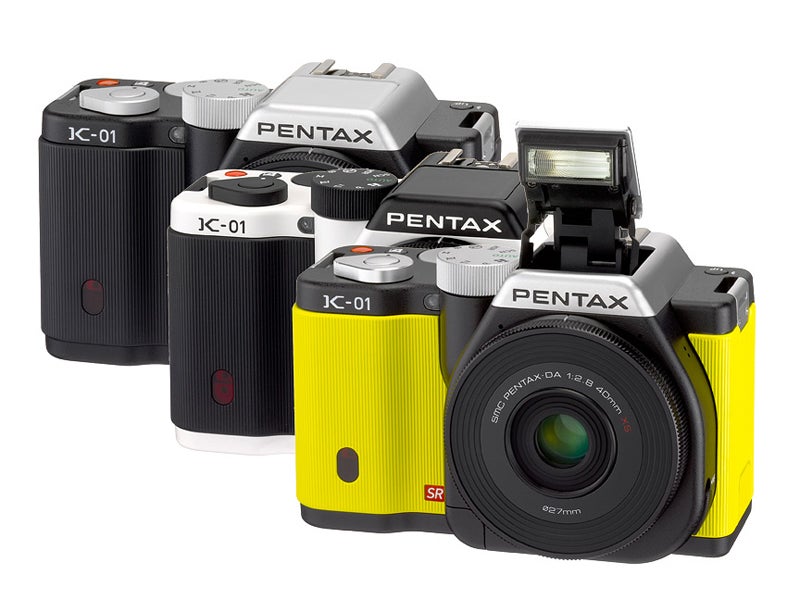 In the UK the model is available in three colours. They range from two straightforward black and silver combinations down to a more ‘bright’ yellow and black combination. Of course the latter will appeal to some and echoes Pentax Japan’s multi-coloured DSLR designs of recent years.

In terms of layout the top of the camera has plenty of space to arrange the mode dial, shutter, rear thumbwheel and brightly coloured Green (Auto Exposure) and Red (movie / function) buttons. Despite looking as though they’re set wide apart from one another, they do fall to the hand instinctively.

There’s no front thumbwheel, however, which means toggling between options in Manual and some other mode.

The new 40mm f/2.8 pancake lens is teeny tiny, so much so it caps off the camera’s design in a very box-like format. Other K-mount lenses give the camera a more traditional look and feel, though add to the bulk and are far larger than most Compact System Camera lens equivalents.

But it’s the K-01’s subtle grip that’s among its biggest design faults. Attach a large lens to the front of the camera and it’s not comfortable in the hand for long periods as there’s nothing to get your fingers tucked around. Seems as though the design here has gone against the very ethos of including the K-mount in the first instance.