It’s almost two years since Panasonic launched the GX1 – a model that at the time of its release was the premium alternative to the GF-series of CSCs in the Lumix lineup. Instead of branding the next generation GX-series model as the GX2, Panasonic has skipped straight past the GX2, GX3 and GX5 to the Lumix GX7 – a camera that’s not only claimed to revolutionise the GX-series, but is also said to be the best camera Panasonic has ever launched according to the manufacturer. These bold statements clearly indicate we’re not looking at a subtle upgrade here but at a camera that has returned to the drawing board and been re-designed from the ground up.

The first thing that strikes you the moment the GX7 is picked up is its size and weight. Compared to the fairly modest dimensions of the GX1, the GX7 is a chunkier model that’s more akin to the size of the Fujifilm X-E1 and Sony NEX-7. A pronounced rubberised grip offers more to wrap your hand around, and as a result of being larger and heavier, it contributes towards a solid and premium feel in the hand. 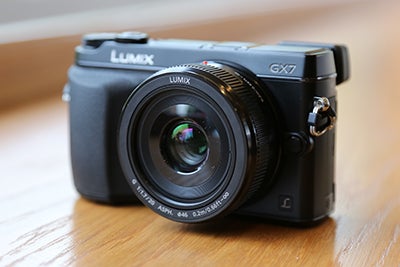 The GX7’s pronounced rubberised handgrip has a superb profile to wrap your hand around.

Similarities between the GX1’s button arrangement and the GX7’s are few and far between. Other than the mode dial that’s similar to the GX1, the GX7 is a completely different camera to look at and operate from the rear. The On/Off switch is in the perfect position to be flicked with your thumb, and when you combine this with the near-instant startup time, there’s no waiting around for a startup screen to disappear before you shoot. There are up to nine function buttons dotted around the body, with the Fn3 button being assigned to Wi-fi, which we used to connect to our iPhone 5 using Panasonic’s Image app. Connection speed was very quick after the Wi-fi passcode had been entered, however images in the playback mode of the app couldn’t be viewed – something we put down to the camera being a pre-production sample that’s yet to receive its final firmware before it goes on sale. 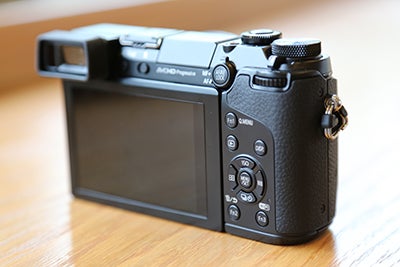 As many as nine function buttons are dotted around the GX7’s body, including a Wi-fi button that’s located at the bottom right for instant connectivity.

The importance of having a viewfinder on a CSC shouldn’t be underestimated and the addition of the GX7’s EVF is very well received. Though it’s not particularly large, it displays an incredibly crisp image for composition or playback purposes. In harsh lighting it’s a godsend. With the option to tilt it up by 90degrees to suit your preferred angle, we have to say it’s one of the best electronic viewfinders we’ve used on a CSC. The idea of having it fixed on the corner of the body is certainly a step in the right direction and saves you having to carry an optional EVF that attaches via the hotshot and plugs into an accessory port. Although the EVF isn’t as slimline as the viewfinder on the Fujifilm X-E1, it’s certainly a step in the right direction. We relied on it in many bright situations where reflections on the screen restricted a clear view of our subject matter. We noticed there was a slight hesitancy between the screen feed and the EVF, but this isn’t a major cause for concern. 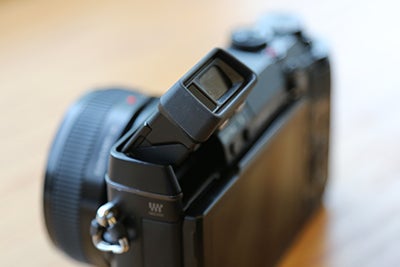 The Panasonic GX7’s electronic viewfinder features a high 2.7million dot resolution – making it a great substitute to the screen in bright lighting conditions.

Adopting Light Speed AF, the GX7’s autofocus performance felt on par with the AF speed of the GH3. For the most part, the camera was used with the 20mm f/1.7 pancake lens, which is to be sold with the camera for £999. The Touch AF technology on the GX7 let us move the AF point to the far corners of the frame, and after taking a bit of time to get familiar with pin-point AF, we used its 10x magnify option to ensure focus was exactly where we wanted it to be – something that’ll come into its own when shooting fine details or macro subjects. 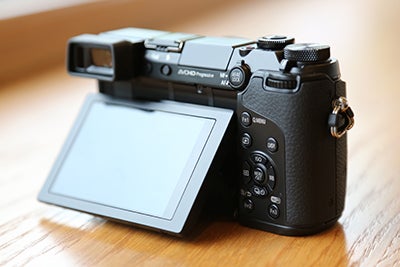 The 3in, 1,040k-dot LCD screen can be pulled out and tilted for high or low shooting.

After shooting 192 images, we noticed the three-level battery gauge was down to one bar, but a total of 320 images can be expected from a single charge of the GX7’s battery when it’s paired with the 20mm f/1.7 pancake lens. The EVF and 1,040k-dot, 3in screen were our favourite features after spending a day with the GX7, but you get the feeling everything has been very carefully thought through – from the twin control dials to adjust aperture and shutter speed on the fly, to the AF/MF switch that is millimetres away from where the thumb rests at the rear. 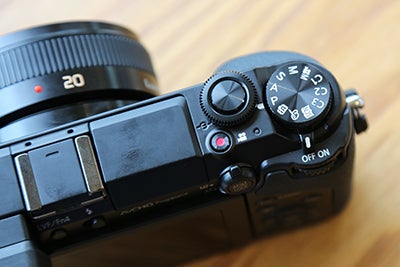 The twin control dials that are positioned beside the mode dial and beneath the On/Off switch offer independent control of Aperture and Shutter Speed in Manual mode.

To sum up our first impressions, the GX7 feels every bit like the premium compact camera it’s designed to be. It has stiff competition in this area of the market from the likes of Fujiffilm, Olympus and Sony so we’ll have to be patient for the full review sample to arrive – something that’s going to be difficult after enjoying the user experience so much during our brief hands-on. 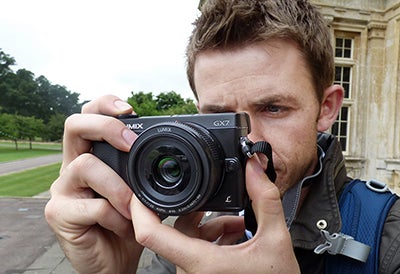 Our first impressions were based on using the GX7 for a full day at a Panasonic Press Event held at Longleat, Wiltshire.