£1,119.00
Say the words Compact System Camera and some of the first thoughts that pop into most people’s minds are a camera that’s smaller, lighter and a convenient substitute to a DSLR. Panasonic produce various examples of compact models in its Lumix lineup but the recent re-branding of its products as Digital Single Lens Mirrorless cameras, or DSLM’s for short, suggests the size of its cameras isn’t the brands key focus. The release of the GH3 further supports this point, and at first glance it’s a camera that clearly resembles a DSLR in terms of its appearance.

Those familiar with the Lumix range will be aware the GH3 is the flagship model in Panasonic’s lineup. Just like the GH2 it replaces, the GH3 is equipped with a 16MP Live MOS sensor that’s been modified to provide a wide dynamic range and a 1EV gain at the high end of the sensitivity scale. The ISO range runs between 200 and 12800, however if you turn the extended ISO function on it’s possible to shoot at a setting that’s equivalent to 125-25,600. 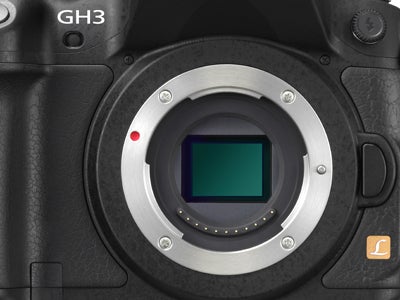 The GH3 offers a PC socket at the top right corner of the body.

The Venus image-processing engine has also been renewed to attain high-speed and high-quality signal-to-noise processing. Without a mirror that has to flip up to allow light to pass through to the sensor, the GH3 is competent of shooting at breathtaking speeds. An impressive burst of 20 frames per second can be achieved in the Super High speed mode, provided you shoot in the JPEG format. Switching to Raw or Raw+JPEG lowers the frame rate to 6fps and when you consider some DSLRs at the same price point can’t shoot this quickly, the GH3 ticks the boxes when it comes to the speed at which it shoots. What’s more, if you require a slower continuous burst rate, 2fps and 4fps settings are also available. 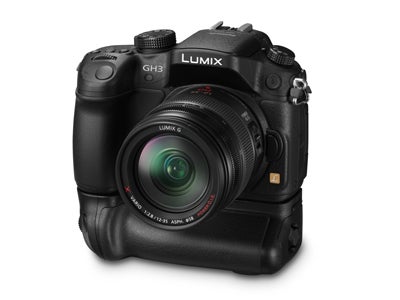 The Panasonic GH3 is supported by the BGGH3 battery grip (£249).

The GH2 gained a reputation for being an excellent tool for video as well as stills, and there are now more movie formats and bit rates to meet videographer’s needs. These include full HD (1920×1080) settings at 50p, 50i, 25p and 24p. There’s the AVCHD format but also MP4 and MOV recording formats too. One of the main gripes on the GH2 was the non-standard 2.5mm mic port. The good news is that this issue has been addressed by fitting it with not one but two 3.5mm ports. These allow you to attach a microphone and a set of headphones to record audio and monitor sound simultaneously. Settings are also offered to control contrast, sharpness, saturation and noise reduction. A microphone level display can also be switched on from the motion picture menu to monitor sound. 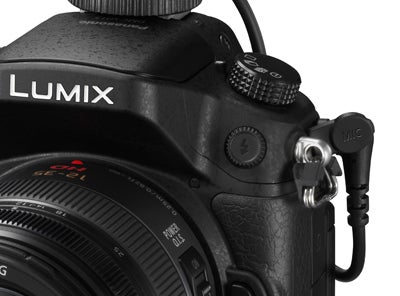 An external microphone can be attached to the GH3’s hotshoe and plugged in to the 3.5mm microphone port at the side.

The GH3’s AF system is labeled High-Speed AF and this contrast-detect AF system supports AF tracking, face recognition as well as Touch AF where you can tap any area of the screen to instantly set your focus point. The screen measures 3in, swings out effortlessly by 180 degrees and tilts by a maximum of 270 degrees – a feature that lends itself to self-portraits as well as high or low-angled shots. The resolution of the display has been improved from 460k-dot to 614k-dot, while the viewfinder now offers an impressive 1.7million dot resolution. It offers a 100% field of view and is now the OLED type, which implies it should have a faster response rate than the GH2 with improved colour and contrast. 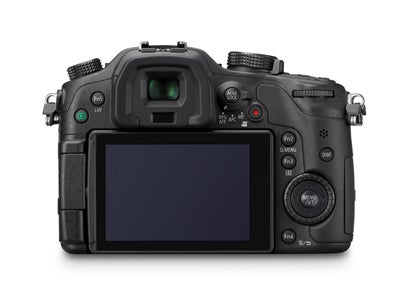 The GH3’s screen is the pull out Vari-angle type, however it doesn’t lie flush to the body.

Adopting the tried and tested 144-zone multi-pattern metering system as found in the G5, GH2 and GX1, the GH3 provides +/-5EV control of exposure compensation. Not one for lagging behind the times, Panasonic has also integrated Wi-Fi connectivity for the first time on any interchangeable Lumix camera. This has fast become a regular feature on the most newly launched Compact System Cameras and it not only lets you send images to mobile devices, it allows you to control your camera remotely without the need of a cable release.