First, compatibility with the ZUIKO and M.ZUIKO lens system. Second, a 16-megapixel Live MOS sensor. Third, the TruePic VII image processor, which adjusts its processing in accordance with the lens attached to the camera, and the aperture setting in use. To find out all the key differences between the new Olympus OM-D E-M1 and exisiting OM-D E-M5, read our comparison article.

The camera is compatible with Four Thirds lenses as well as Micro Four Thirds, thanks to the MMF-3 adapter that will be bundled with the camera for E-system users.

A new lens has been developed specifically for the camera: the M.ZUIKO DIGITAL ED 12-40mm, with a constant aperture of f/2.8. 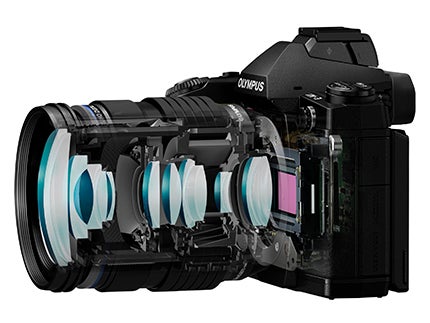 Image: A diagram of the interior of the new M-ZUIKO DIGITAL lens developed for the OM-D E-M1

The firm claims the OM-D EM-1 delivers Olympus’s ‘fastest ever’ AF system, though we don’t yet have a number for precisely how fast we’re talking.

The E-M1 detects which type of lens is being used and then adjusts AF accordingly: it will use Contrast AF with Micro Four Thirds, and switch to phase detection if it detects a Four Thirds lens being used.

Focus peaking is available for manual lenses, and high-speed subjects can be captured with 10fps sequential shooting.

Olympus has retained the Hybrid 5-axis Image Stabilisation, which was originally found on the E-M5. Hybrid IS compensates for movement around the axis of the lens, as well as horizontal and vertical shift and pitch and yaw.

Olympus claims that Hybrid IS is so effective that the user could potentially record a shake-free full HD movie while ‘literally on the run’.

At its rear, the OM-D EM-1 has a 3in tiltable touchscreen with
1.04million dots resolution – a jump from the 610-thousand dot
resolution of the E-P5. 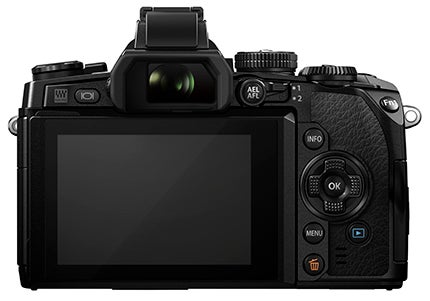 Image: The rear of the OM-D E-M1, with 3in screen, EVF and customisable switches and dials

The EM-1 boasts Olympus’s most powerful electronic viewfinder yet. Similar to the VF-4, the E-M1’s EVF boasts 1.48x magnification and 2.36million-dot resolution.

A number of new features are unique to the E-M1’s EVF, including an HDR preview mode that allows the user to view HDR images before shooting them.

It also introduces a newly developed Colour Creator, which allows the user to alter the colours in an image using dials on the top of the camera, and display the results in the LVF in real time (Olympus promises an essentially undetectable time-lag of just 29 milliseconds).

The solid magnesium build of the OM-D E-M1 is dust and splash-proof, and Olympus says it will be able to operate in temperatures as low as -10ºC.

The same solid build has been applied to the HLD-7 – an additional vertical grip to allow the camera to better support heavier E-mount lenses. 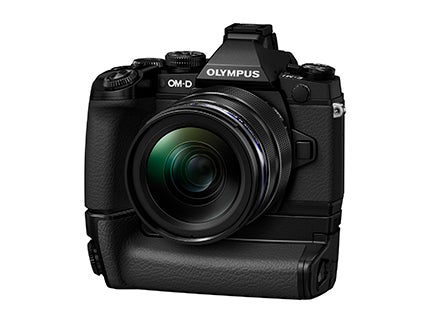 Image: The OM-D EM-1 with an HLD-7 grip attached

The dials, switches and control rings on the camera are all reassignable, giving the user customisable control over how the camera handles.

Flicking a lever allows the user to change from one preset to another, allowing the user to easily use the same dials to control multiple functions.

The OM-D E-M1 is fully Wi-Fi supported, able to share and upload images quickly onto mobile devices. There is also an option to use a smartphone to control the camera remotely, and preview modes such as Live Bulb can be viewed on the phone’s screen.

We’ve already been able to have a quick look at the OM-D E-M1 for ourselves, and you can get a feel for how the camera handles by watching our video:

The Olympus OM-D EM-1 is available for pre-order and will be in shops from mid-October 2013.

Although the OM-D E-M1 might not look any different to the OM-D EM-5, a close examination clearly exposes its senior position in the new OM-D lineup. At the front of the body, a new PC socket will be gratefully received by experienced photographers wanting to trigger off-camera flash with a sync cable as opposed to using a wireless transmitter via the OM-D EM-1’s hotshoe. Of course this is a feature that’s to be expected on a premium model and is one already seen on the Panasonic Lumix GH3 – one of the Olympus OM-D EM-1’s rivals in the CSC sector. 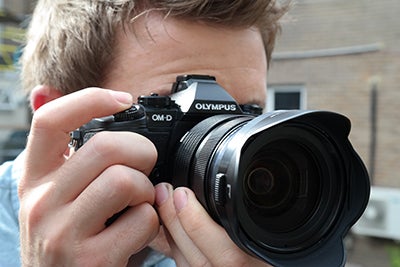 Unlike the OM-D E-M5’s basic grip that has protruding thumb rest at the rear, the EM-1 handles differently to its OM-D cousin. It feels much more like the premium model it’s meant to be with a sculpted handgrip that allows you to take hold of the body more securely. Button placement has also been completely re-worked and rather than the mode dial being positioned to the left of the viewfinder, it’s now on the right where it can be controlled more conveniently by your thumb. It’s worth noting the new mode dial has a locking mechanism too, which caught us out on a few occasions when attempting to change the shooting mode. 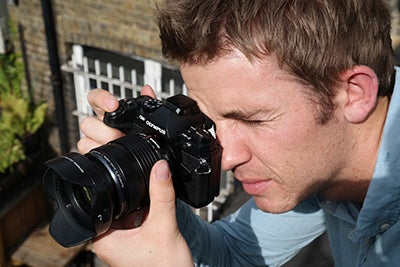 OM-D EM-5 users who are likely to have been frustrated by the awkward positioning of the playback button will be glad to know its been relocated to a much more suitable location below the dpad. Buttons keep the spongy feel of the OM-D E-M5’s, but are slightly larger and easier to operate. The same can be said for the two scroll dials, which are now closer to the edge of the body and are in a more comfortable position for adjusting aperture and shutter speed at a moments notice.

The jump in screen resolution from 610k-dot to 1.04million dots is another major improvement that’s noticeable as soon as the camera is switched on. The resolution of the electronic viewfinder manages to go one better though, and with a 2.36 million-dot resolution it’s right up there as one of the best, if not the most impressive EVF we’ve ever used. Having a dedicated button to access continuous shooting, self-timer and HDR also speeds up the time it takes to access these commonly used functions, while autofocus and metering modes get their own dedicated button too. 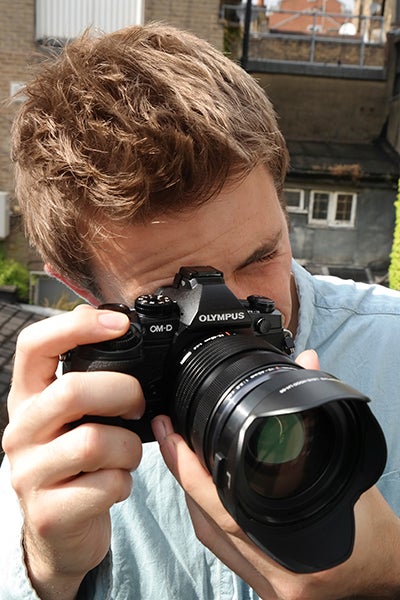 The E-M1 that we took a hold of during a product briefing was coupled with the new 12-40mm f/2.8 lens – an optic that’s larger and feels more refined than the 12-50mm kit lens that was originally sold with the OM-D EM-5. Interestingly, Olympus has opted for the push pull type of AF/MF mechanism and first impressions of its responsiveness in combination with the EM-1’s improved AF system were very good indeed, with no issues acquiring focus in a relatively dark function room.

The two things that really stood out during the first few minutes of using the product were its handling and electronic viewfinder. It’s in a different league when it comes to the way it feels in the hand compared to the OM-D E-M5 and there are very few electronic viewfinders that come close to how sharp the EM-1’s is. It’s hard to put into words, but we’re certain it’s going to set the standard we judge EVF’s from in the future.

With the expected arrival of our review sample in the next few weeks, we’re counting down the days before we lay hands on the OM-D E-M1 again to give it a full test to find out how it performs in a full review.