While it was a long time coming, Nikon’s 1 series of compact system cameras has proved incredibly popular since its launch. The Nikon 1 V2 is the second generation in the V strand of the 1 series, and features a complete redesign on its predecessor with a selection of key improvements. How does it fair under closer scrutiny?

£799.00
The compact system camera (CSC) market has seen an explosion in popularity in recent times, with the marriage between the versatility of interchangeable lenses and the practicality of having a body smaller than a traditional DSLR proving a winning formula. Nikon were relative latecomers to the market, with the 1 series launching towards the end of 2011. When it arrived, it did so with a host of bells and whistles, although the more advanced Nikon 1 V1 model left some disappointed by the combination of a high price tag and a perceived tendency towards the more entry level photographer in elements such as the deep-rooting of manual modes within the menu system.

The Nikon 1 V2 picks up where the Nikon 1 V1 left off, with many similar features and a completely redesigned body. The question is, does it improve on the impressive, yet ultimately flawed Nikon 1 V1?

One of the areas of criticism of Nikon’s 1 series is the choice of sensor size. The version found in models to date measures in at 13.2 x 8.8mm and offers a 2.7x crop factor compared to a full-frame sensor. This sensor is by physically smaller by some distance than that found in the vast majority of other CSCs, somewhere in between that found in a conventional compact camera and a Four Thirds system sensor. 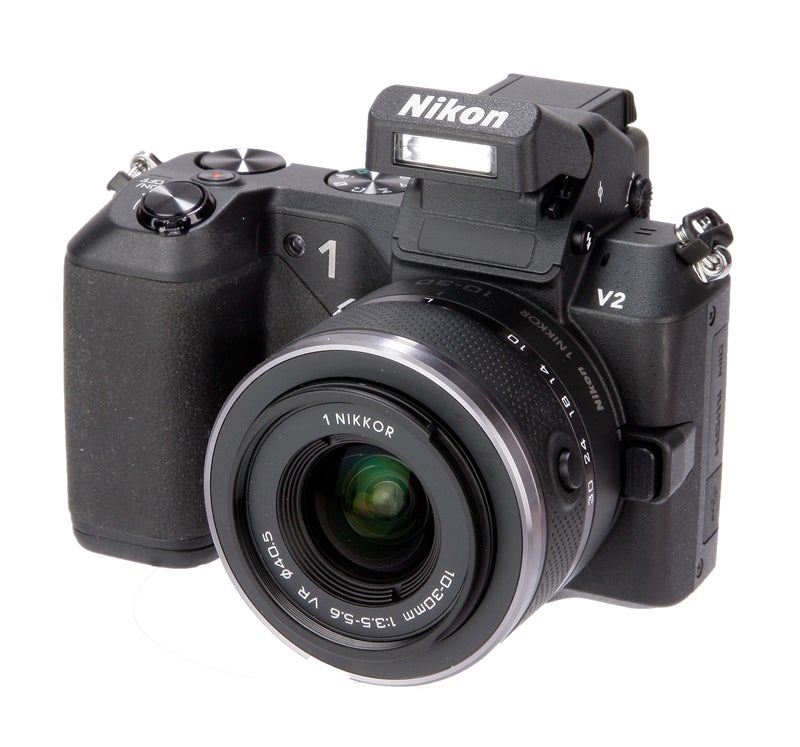 The Nikon 1 V2 inherits this sensor, and as a result the same concerns remain. The only difference to the sensor is that the resolution is now 14.2MP as opposed to the 10.1MP found in the Nikon 1 V1. This leap in resolution raises its own concerns, with a higher resolution on a smaller sensor normally presents issues with noise at higher ISO settings.

The Nikon 1 V2’s sensor is capable of capturing Raw and JPEG files as well as HD video at a range of resolutions, the maximum being 1920 x 1080 and a rate of 60i. A criticism of the Nikon 1 V1 was that the video capture was only available in auto mode – thankfully the Nikon 1 V2 now features full PASM control when shooting video. The advanced video modes found in the Nikon 1 V1 remain, with the option to shoot video at 400fps and 1200fps, although these play back at a reduced resolution of 640 x 240 and 320 x 120 pixels respectively.

One of the new features finding a home on the Nikon 1 V2 is the EXPEED 3A image processor. This ‘next-generation’ dual processing engine processes images at 850 megapixels a second and is the key to some impressive headline performance figures. For example, the continuous shooting speed heads up to a lightning 60fps at full resolution, although this rate is only available for 40 frames and with a fixed focus point. If you want to utilise the camera’s AF system, you’ll be able to shoot at a still-impressive 15fps for around 45 frames.

Although the Nikon 1 V2 can hardly be described as a camera bursting at the seams with new features, there are certainly enough to pique the interest. Another criticism of the Nikon 1 V1 was the lack of a built-in flash, and the fact that the optional flashgun cost in excess of £100. The good news is that the Nikon 1 V2 features a built-in flash with a full range of flash modes, while those looking for more flash power, or to utilise the flash guns purchased for the Nikon 1 V1, will be able to do so thanks to the inclusion of an accessory port above the viewfinder prism and on-board flash.

As mentioned, there are other elements of the specification that remain the same as on the Nikon 1 V1, two of which are the LCD screen and viewfinder. The rear of the camera houses a 3in, 921k-dot TFT LCD which, while not the highest resolution in its class, is certainly in keeping with the majority of CSCs on the market today. Above the LCD screen sits an impressive 0.47in, 1440k-dot TFT LCD viewfinder complete with brightness adjustment and dioptre control to suit any of your optical needs.

The Nikon 1 V2 features a full range of shooting controls aimed at making the image capture process as simple as possible. These include not only an advanced auto mode but also a ‘Best Moment Capture’ settings which includes the ‘Smart Photo Selector’ feature which takes up to 20 high-resolution images and recommends five of the best for you to keep. Alongside these simplified modes sits full PASM shooting capture to allow for advanced photographers to get the images they’re looking for.