Nikon 1 AW1 Review – The Nikon 1 AW1 is a rugged compact that merits a rugged test. With a storm approaching, what better way to test Nikon’s latest 1-series camera than heading out into the North Sea with the RNLI? 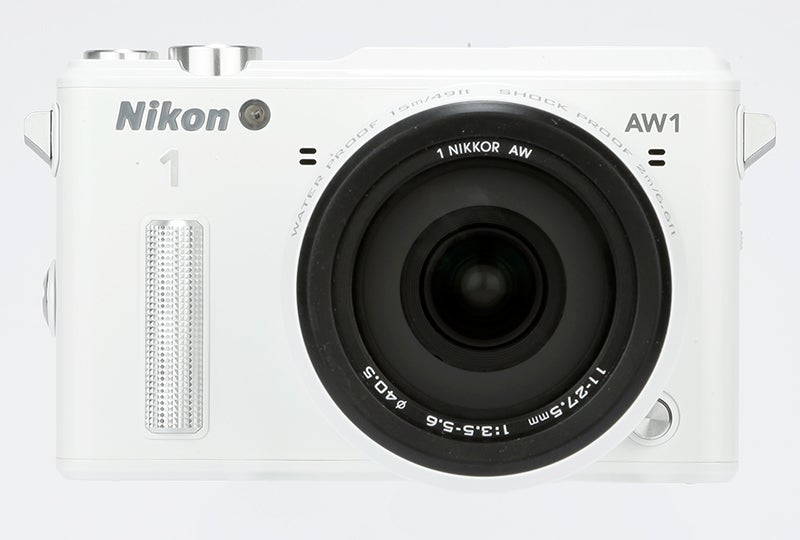 If there’s one thing I strive for as a photographer, it’s getting a great shot whatever the weather. As I set my car wipers to high speed to shift the monsoon rain off my windscreen, I realise today’s weather isn’t the finest for photography, let alone testing a new camera. To my disbelief the rain turns to sunshine as I arrive at the location for today’s shoot – the RNLI lifeboat station in Cromer.

On my arrival, one of the first questions I get asked by a volunteer crew member on today’s practice mission is: how waterproof is the camera you’re going to be testing? As I begin to explain that the camera in question is the Nikon 1 AW1 – the world’s first fully waterproof and shockproof system camera – I glance down the long slipway and look out to the horizon where the waves and conditions are said to be worsening further out to sea.

As I think about the brutal conditions the AW1 could be exposed to on this shoot, getting it soaked in salt water is about as good a test as any for a camera that’s claimed to be waterproof down to 15m (49ft) and able to withstand the inevitable rough and tumble that comes with shooting off limits.

After explaining the concept of the AW1 to the enthusiastic crew and the way it incorporates a 14.2MP CX-format sensor that’s larger than the 1/2.3in type typically found within most waterproof compact cameras, they’re quick on the uptake that the AW1 is all about capturing better image quality in demanding shooting environments. As I attach the neck strap to ensure the gloss white body doesn’t slip from my grasp, a member of the inshore lifeboat crew suggests taking the AW1 out to capture shots of us launching the slipway lifeboat. I oblige, handing him the camera, not knowing what he was about to do. 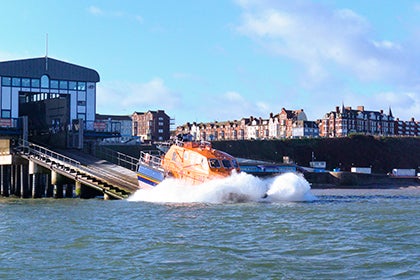 Ten minutes later and launch complete, the inshore lifeboat pulls alongside. The AW1 gets passed back dripping with seawater and droplets covering the front element of the lens.

An inspection of the images on the crisp 3in, 921k-dot screen revealed the crew member took me at my word about it being waterproof. He’d shot some superb images from the surface of the water, and as it passed the initial inshore test, I now had to put it through its paces out on the North Sea.

As we head out to the point where the crew would practise their rescue exercises, I get the chance to refine the AW1’s settings. Regrettably, there’s no P,A,S,M mode dial, which is in keeping with the Nikon 1 system, but presumably excluded to prevent sand and moisture creeping into the internals. What there is however, is what Nikon calls Action Control, which allows me to tilt the camera to choose my shooting mode, provided that the Action Control button is depressed.

The main menu system has a similar layout and two-tone grey appearance to other Nikon 1-series cameras, but what I really need is a quick menu to access frequently used settings on the fly. After selecting Creative Shooting mode, I toggle through to Aperture-priority auto mode, but then I realise there’s no indication on the body as to which buttons are used to manually change the aperture value.

Seconds later and I discover the playback zoom buttons are assigned to this task. With no option of changing the ISO other than via the convoluted route of going into the processing menu, this could lead to missing a shot, so I opt for ISO 400 – as good a starting point as any. 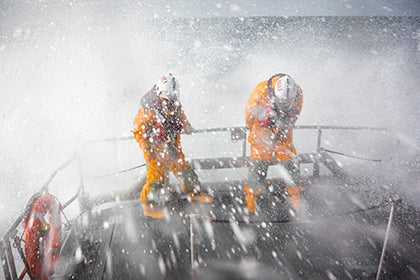 Just as I get my sea legs, disaster strikes. A huge wave tips the boat, and me off balance, colliding the AW1’s 11-27.5mm kit lens with a solid support beam inside the cabin. ‘Any damage?’ a crew member asks. I point out that the lens is designed to be as shockproof as the body and is able to withstand heavy impacts, as well as drops, from a height of 2m. ‘Just as well,’ he replies.

Within seconds of stepping outside I find myself pulling my lens cloth from my pocket to wipe off the mist of seawater sprayed across the lens.

As I begin to take my first shots  I find myself wanting to raise the AW1 to my eye, but with no viewfinder and no option to attach an EVF with its lack of a hotshoe, I’m reliant on the screen for compositional purposes.  While positioning the AF point off-centre, I discover the focus point can be set to the far edges of the frame and thanks to the Hybrid AF system, the lock-on speed is snappy – good news because the crew are quickly manoeuvering into position.

I shuffle down the side of the boat and it strikes me just how much of the scene I’m able to fit in the frame. The kit lens is equivalent to 16.5-41mm in film terms – wide enough for what I need, but for those who’d like a faster and wider alternative, Nikon has also produced a 10mm f/2.8 lens that’s also fully water and shock resistant. 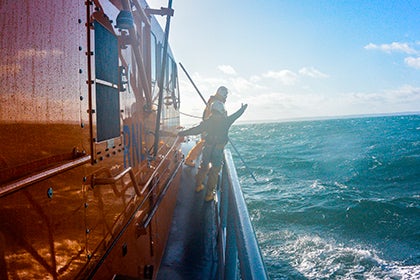 Just as I go to shoot a few more frames, I notice the lens is showing signs of fogging, so I retreat to the cabin and inspect the O-ring between the lens and the body. It’s as dry as a bone, leading me to think it could be the sudden change in humidity that’s causing the issue. Leaving the AW1 in the dry confines of my bag for ten minutes resolves the problem – just in time to capture a series of dramatic waves crashing over the crew outside.

To record the action I put the AW1’s rapid burst rate to good use, setting it to 15fps rather than 30fps or 60fps to ensure I don’t risk overloading my SD card with redundant shots and can continue shooting in continuous AF.  I rattle out 22 frames at 15fps, giving myself a few seconds between bursts for the buffer to recover. 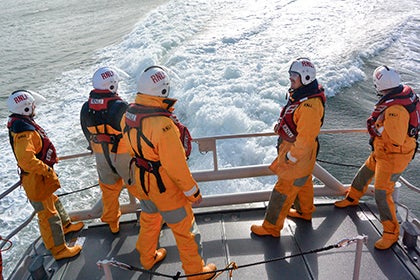 As the conditions worsen, the waves become higher, but thankfully the AW1 continues to repel the water. The combination of my 1/3200sec shutter speed, rapid burst rate and the AW1’s rugged design are allowing me to capture some amazing images in brutal conditions where non-waterproof cameras would have drowned. It’s safe to say the AW1 has passed the waterproof test, albeit with some fogging issues early on that thankfully haven’t reoccurred since.

As the crew wrap up their exercise,  I take the opportunity to review my shots on the screen using the AW1’s Action Control. By tilting the camera to the left I quickly scroll through the shots to pick out my favourites to show the crew. As we head back to shore, I realise I’m in awe of the AW1 and what it has survived. Few cameras would have put up with what the AW1 was subjected to in this test, unless of course, an expensive waterproof housing was used. To sum up, it’s the most rugged system camera we’ve used, and boy did it need to be!