One week down the line from the teaser image and we have official word of the new Fujifilm X-T1. That word is: it’s not an X-Pro2, but an entirely new beast that liberally borrows from the rest of the series as well as bringing new features to the table.

Chief among the additions to the new X-T1 is a reworked DSLR-style 2.36million-dot OLED EVF, which sports 0.77x full-dram equivalent magnification and an essentially imperceptible lag of 0.005 seconds.

The X-T1 slots above the X-E2 and below the still much-loved X-Pro1 in the X-series lineup. It borrows its 16.3MP APS-C X-Trans II CMOS sensor and EXR Processor II from the X-E2.

This means it retains the X-Trans-related features that have made the X-series so popular, such as the Fast Hybrid AF that combines phase-detect and contrast-detect AF thanks to phase-detect pixels built right onto the sensor, and the X-Trans pixel array that reduces moiré.

This means that the X-T1 will enjoy the lightning-fast focusing of the X-E2, which Fujifilm claims is capable of acquisition times as lean as 0.08sec.

Because the X-T1 is also newly compatible with SDXC UHS-II SD cards, which have twice the writing speed of standard cards, it can manage a continuous shooting speed of 8fps over the X-E2’s 7. 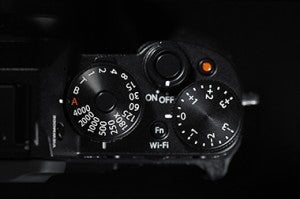 Image: Some of the top dial controls of the Fujifilm X-T1: the exposure compensation dial and the shutter speed dial

The ISO performance of the X-T1 has also been improved with a redesigned circuit board that makes it now extendable to 51,200. As well as the EVF, the X-T1 sports a 1.04million-dot tilting LCD screen for composing images.

The XT1 is, of course, equipped with Wi-fi, but it also appears that Fuji is making extensive improvements to its Wi-fi app to coincide with the new camera’s release. As this slightly clunky app was one of our criticisms of the X-E2, this is welcome news. Hooking your phone up to the X-T1 allows for remote shooting with touchscreen AF, and you can also use the GPS on your phone or tablet to geotag images.

The Fujifilm X-T1 is honestly hard to fault. The weather sealing is a great touch, the lightning fast AF makes a welcome return, but what really sells it is the electronic viewfinder, which has to be one of the most impressive on any digital camera. Super-fast, super-crisp – it seems to us like the EVF that’s going to start winning over optical die-hards.

The manual controls are well thought-out, and as a consequence the Fujifilm X-T1 handles exceptionally well. The general look of the X-T1 makes it hard not to draw comparisons to the Nikon Df, but what accentuates this even more is the feel of it, with the intuitive top dials for each function. For our money, this is much closer to being a film experience in a digital body than the Df ever was. It feels as though Fujifilm has really thoroughly thought through the placement of the controls, and it adds up to a satisfying user experience. In particular the placement of the exposure compensation dial on the right hand side feels very natural when shooting.

The build of the camera is excellent – it’s compact but feels robust in the hand, thanks in no small part to the new weather sealing. It’s not heavy, but the magnesium build feels pleasingly solid.

As we mentioned, the X-T1 slots into Fujifilm’s lineup above the X-E2 and below the X-Pro1, rather than being a replacement for either. Fujifilm has suggested it as a possible second body for DSLR owners, though the price point is rather high for those who might want to go down this road. We’ve only so far had our hands on a pre-production version, so will have to wait until we get hold of a review sample before delivering a definitive verdict.