The Sony RX100 is the first real premium compact camera from the brand. Has it been worth the wait? Find out in the What Digital Camera Sony RX100 review. 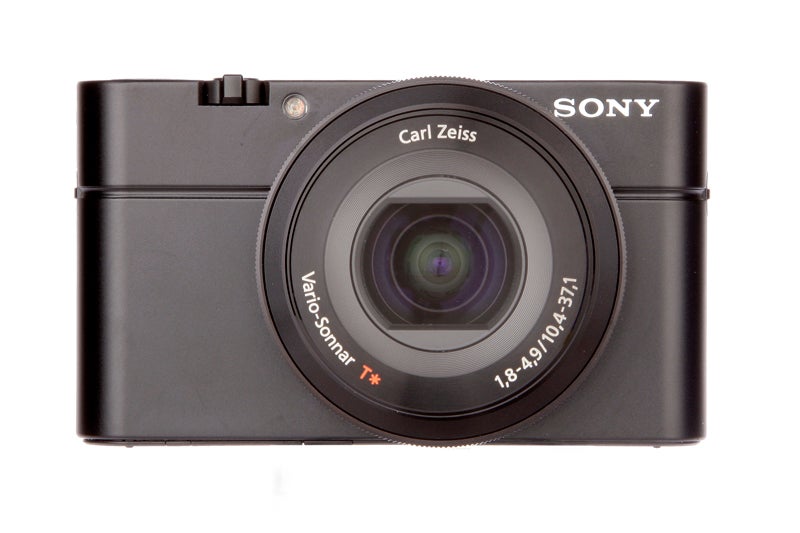 With camera smartphones taking big chunks out of the point and shoot compact camera market at the moment, manufacturers need to deliver products to tempt people away from relying on their iPhone or other devices for on-the-go photography.

Premium, creative compact cameras offer that clear edge over a smartphone. With larger sensors, better optics with fast maximum apertures, full manual control if needed and the ability to shoot Raw files for optimal quality, these cameras offer the discerning photographer something more than a run-of-the-mill compact or smartphone.

While a host of manufacturers offer creative compacts in a range of shapes and sizes, Sony hasn’t really offered anything to compete in this sector…until now.

The Cyber-shot RX100 is Sony’s first-ever pocket-sized creative compact, and from a glance down at the specification, they haven’t done things by halves.

To really set the RX100 apart from the competition, Sony has opted to employ a 1in sized sensor with a 3:2 aspect ratio – the same size as found in Nikon’s 1 series Compact System Cameras, and provides a surface area 4x larger than a typical 1/2.3in chip found in most compact cameras. Not only that, but the sensor is quite a bit larger than the sensors found in its closest rivals, easily beating the 1/1.7in chip in the Canon PowerShot S100 and G12 and the 1/1.63in sized sensors found in the Olympus XZ-1 and Panasonic LUMIX LX5, while the surface area of the RX100 sensor is twice as large as that in the Fujifilm X10, which has a sensor size of 2/3in.

The other thing to be clear on is that while it may share an identical physical sensor size to the Nikon 1 series, it’s a completely new chip, with an impressive resolution of 20.2MP. Even with the high resolution, the photosites (pixels) on the RX100 are 4x larger than those on a typical 1/2.3in sensor, allowing the RX100 to have an ISO range from 80-6400, that’s extendable to an ISO equivalent of 25,600 with Multi Frame Noise Reduction. 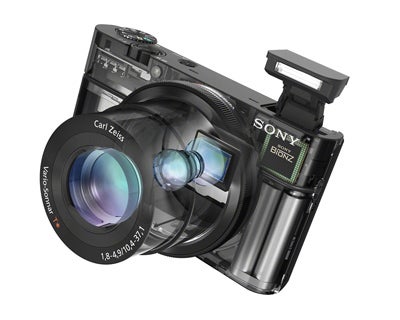 To match the large sensor, Sony has chosen a fast 28-100mm lens engineered by Carl Zeiss with a variable maximum aperture of f/1.8-4.9. While it’s not quite as wide as some rivals, 28mm still offers a very decent wide-angle coverage and features Zeiss T* coating for reduced reflection. There’s also an Advanced Aspherical (AA) lens element is also employed to reduce the overall size of the lens without sacrificing quality, while the lens also features a 7-blade aperture diaphragm to produce pleasing Bokeh (out-of-focus areas). As far as anti-shake is concerned, the RX100 incorporates Optical SteadyShot for still images, while Optical SteadyShot Active Mode is on tap for video recording.

The rear of the camera features a 3in display with a 1229k-dot VGA display that for the first time features WhiteMagic technology, where white pixels are added to the RGB structure to contribute to the brightness of the display, while it also sees a 35% reduction in power consumption. On top of that, the screen also incorporates Sony’s TruBlack technology.

Interestingly, the RX100 has no hotshoe or accessory port integrated into the design of the camera, so if you like shooting with the camera raised to your eye, then you may be a bit disappointed as there isn’t the option to attach an additional electronic viewfinder if you desired, as you can with the Olympus XZ-1 and Panasonic LX5.

As with pretty much all compacts, the RX100 uses contrast-detect AF, with a host of AF modes to choose from that includes a wide-area Flexible Spot, AF tracking and Face Detection, while there’s also Peaking MF assist – something we first saw on Sony’s NEX-series Compact System Cameras, that highlights sharply-focused areas on the rear screen.

Shooting in JPEG only, there are a host of Picture Effects that can be applied to your image at the time of capture, that include Toy Camera (5 variations), Pop colour, Poterization (2 variations), Retro, Soft High-key, Partial colour (4 variations), High Contrast Mono, Soft Focus (3 variations), HDR Painting (3 variations), Rich-tone Mono, Miniature (7 variations), Water Colour and Illustration (3 variations). There’s the option to shoot Raw files as well, while Sweep Panorama mode shoots a series of shots consecutively as you move across the vista, before stitching them together to create one final panoramic image.

Find the best deals for the Sony Cyber-shot RX100