As you would expect for a camera that possesses the largest screen ever seen on a digital camera, the Samsung Galaxy Camera is by no means small. The rear of the camera is dominated by the touchscreen with physical buttons noticeable by their absence – although this comes as no real surprise as physical buttons aren’t entirely necessary when you’ve got such a large touchscreen. While there’s no denying the benefits of having a 21x optical zoom when it comes to imaging prowess, offering a real benefit in this regard over a smartphone, its presence in combination with this large touchscreen does turn the Samsung Galaxy Camera in to a bulky shooter. 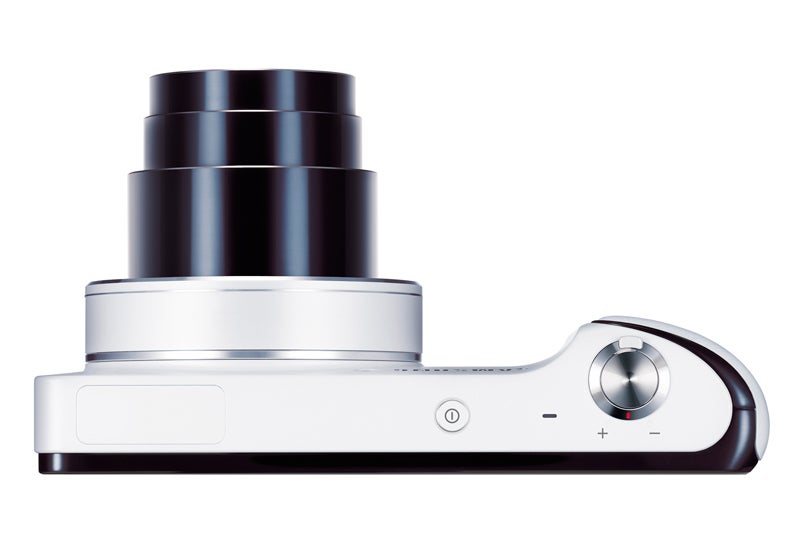 Although the majority of the Samsung Galaxy Camera’s functionality is accessed and controlled from the ample touchscreen, the rest of the body does feature a few control buttons. On the top plate sits a shutter release button complete with zoom lever, as well a power button. As the device is half-smartphone half-smartcamera, there’s no surprises that these buttons serve dual purposes – the zoom lever serves as a volume control for the device, while the power button not only activates the camera, but also puts it in to locked mode.

The only other physical button found on the camera is the button used to trigger the camera’s flash on the left hand side. Outside of this, the rest of the body is noticeably minimalist and as a result it does have a certain sleek appearance. One possible oversight in the pursuit of keeping the body as minimal as possible is the absence of any functionality around the lens ring. Other Samsung cameras have previously featured an ‘i-Fn’ function ring – essentially a customisable control wheel – around the lens and thus made better use of the area. Hopefully future Samsung Galaxy Cameras will feature the same functionality. 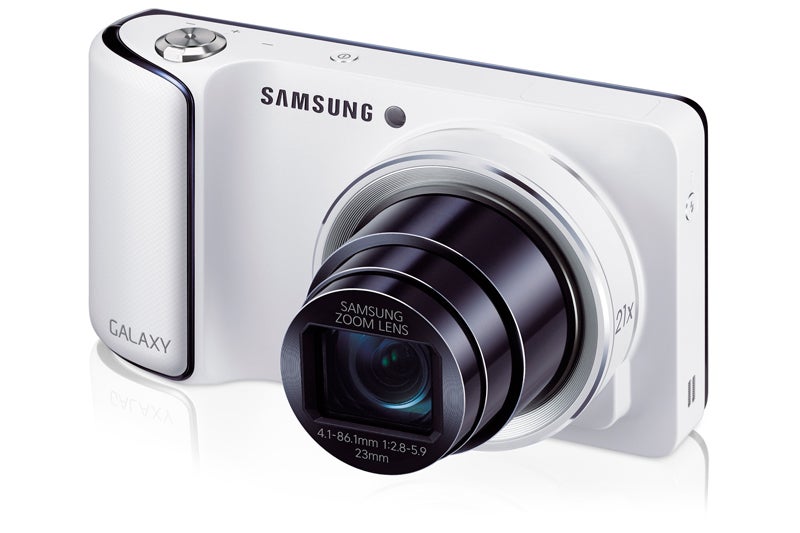 The right hand side of the Samsung Galaxy Camera’s body houses a reasonably-sized handgrip which, in combination with the protruding lens, offers a steady grip that’s welcome when shooting at longer focal ranges. It does present a bit of an issue when using the Galaxy Camera in traditional portrait smartphone orientation as it’s difficult to get a steady grip on the camera – either you have the handgrip in your palms, which is far from comfortable, or you have the handgrip at the top, which makes the device top heavy.

On the positive side of things, the implementation of the Android 4.1 – or Jellybean – on the Samsung Galaxy Camera means that the integration between digital camera and smartphone is as true as we’ve seen to date. Once you’ve got over the handling issues and the bulk of the device, the interface is seamlessly navigable – there are no compromises as those found in other similar devices such as those found with Wi-Fi access such as that in previous Samsung ‘Smart’ cameras. 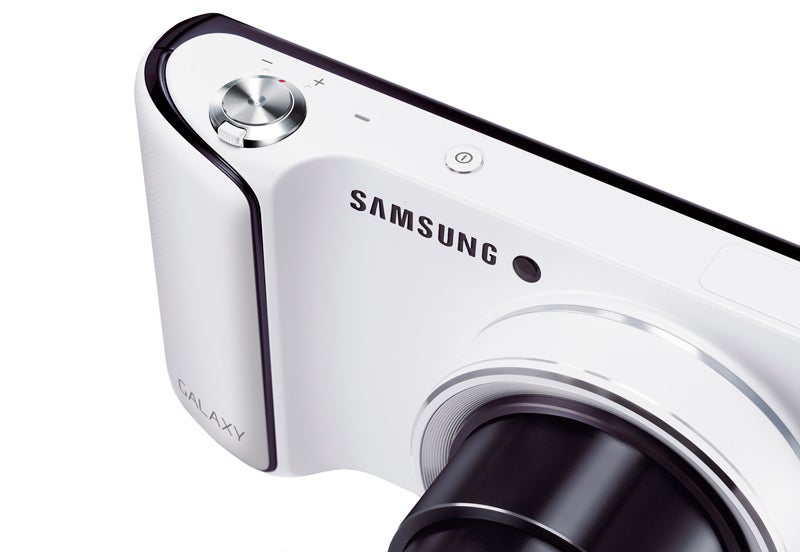 The sheer size of the touchscreen on the rear of the Galaxy Camera strikes you the second you pick it up. At 4.8in, it’s the very same as that found on Samsung’s acclaimed Galaxy S3 smartphone and on the whole it offers much the same high-level performance. The capacitive touchscreen technology offers quick operation of the device, as well as the camera functionality – as you’d expect for a device driven by a touchscreen, the Galaxy Camera offers touch focus control, as well as a touch shutter button on the model’s screen as an alternative to the physical shutter button on the top of the device.

One slight drawback with the screen is its aspect ratio. While the 16:9 format is perfect for capturing HD video and watching video content, it doesn’t match the sensor size. As a result, if you wish to shoot full 16MP stills you’re presented with black tramlines down the sides of the image.

It’s worth noting that this wide array of advanced technology does present certain issues. The large LCD screen, GPS and 3G technology are all notorious culprits when it comes to draining battery life and this is once again the case with the Samsung Galaxy Camera. If you are using any of the elements independently the battery life isn’t too bad, however as soon as you start to use the Galaxy Camera to the full extent of its capabilities battery life quickly depletes.

During the testing process we took the Samsung Galaxy Camera out shooting through the centre of London, navigating using the Google Maps app, editing images with the on-board Photo Wizard and Adobe Photoshop Express apps and uploading to Facebook on the go. Now these are all fairly battery-sapping tasks, but they are the tasks upon which the Galaxy Camera is sold, and although we did manage around four or five hours of shooting the battery soon ploughed through its charge. As mentioned previously the Galaxy Camera utilises the same battery as that found in the Galaxy S2 smartphones, and as a result spare batteries are affordable and readily available, and certainly a wise investment. 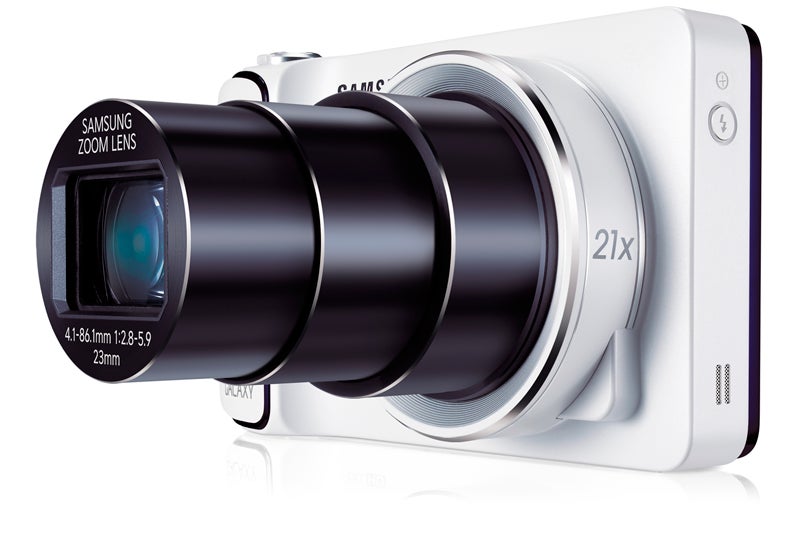 When you consider the amount of varying technologies the Samsung Galaxy Camera combines – essentially the splicing together of smartphone and smartcamera – you have to say that operational speeds are reasonably prompt. The camera functionality can be access through either the physical shutter button on the top of the camera or by pressing on the camera app button, and either of those two processes will have the camera up and running in a matter of seconds. Once shooting, shot to shot speeds are reasonable, while a quick press of the ‘Home’ button will almost instantly close the camera down and drop you back in to the pleasing Android interface.

This full-blooded Android interface and 3G technology are a real benefit to have on the camera. While it does allow for the dalliances associated with smartphone usage, such as playing Angry Birds or Cut the Rope, it really does add another dimension to digital photography. The model’s sharing capabilities are seamless, while the fact that you can back-up to the cloud as you shoot without the need for Wi-Fi is also welcome.