The boost in resolution to the Fujifilm X100S’s EVF is also noticeable, delivering an even crisper representation than the one found on the X100 – so much so that we were surprised how little we used the optical viewfinder instead, with the EVF our choice for most shooting situations. The OVF is still handy to have and is the best around (of the few available on a compact), delivering a 90% field-of-view and a host of shooting info overlaid in the display.

The Fujifilm X100S’s rear screen is fine in use for reviewing images – though we’d have like to have seen a higher resolution to bring it a bit more up-to-date – but the lack of touchscreen interface is no surprise considering the ethos of the camera. 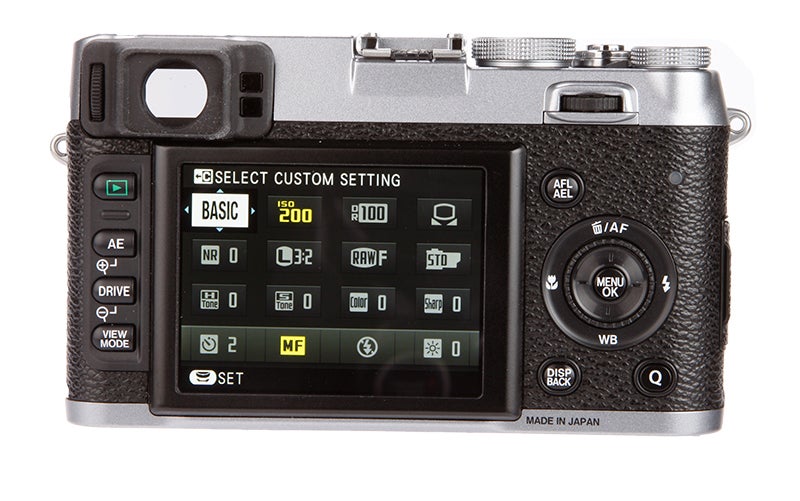 With the choice of either program, shutter priority, aperture priority and manual shooting modes, the Fujifilm X100S feels like a focused photographic tool as opposed to some cameras that seem almost overloaded with features. While program mode (both the shutter speed dial and aperture ring set to A) will allow you to use it as a very luxurious point-and-shot camera, the pleasure comes from the hands-on changes to the aperture and shutter speed that makes you feel more involved with the picture taking than a lot of other cameras manage.

Other controls fall to the hand easily as well – exposure compensation sits along the top plate, as well as a function button that’s preset for ISO control. The inclusion of a Quick menu is a real bonus, allowing quick adjustments to the Fujifilm X100S’s core shooting settings, while the revised menu interface is a lot more polished and easier to use than the one found on the Fujifilm X100.

The introduction of phase-detect AF pixels on the sensor has paid dividends, with the Fujifilm X100S’s AF system quicker than the Fujifilm X100‘s in use, though it still slows up in low contrast and low light conditions. In manual focus and the split-screen focusing display works well, while the manual ring itself is weighted nicely.