Canon’s launch of the EOS 6D may have taken the limelight at Photokina 2012 but the announcement of the Powershot SX50 HS also caused quite a stir.

The Canon SX50 HS stands out from many of its rivals in the market by boasting a 50x optical zoom. It’s the first compact stills camera to offer such a huge focal range and in 35mm terms it’s equivalent to 24-1200mm. On the barrel of the lens there are focal length indications and the zoom lever offers reasonable control though we wouldn’t have minded a touch more precise control. The lens zooms from wide to full telephoto incredibly quickly and the maximum aperture at the wide end is f/3.5, closing to f/6.5 at the long end. Canon’s Optical image stabilizer technology is also used and allows you to shoot 4.5 stops slower than would otherwise be possible. 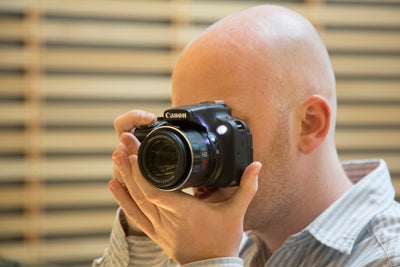 Lens aside, the SX50 features a back-illuminated CMOS sensor which is the 1/2.3 type. Offering a 12.1MP resolution, ISO can be manually set between 80 and 6400 and the shutter speed can be set anywhere from 15seconds to 1/2000sec. Full manual control is taken from the top plate using the mode dial and as well as program, aperture priority, shutter priority and manual modes there’s a selection of scene modes, including stitch assist, that lets you shoot panoramic images in one fluid movement. 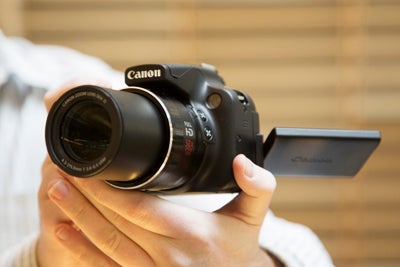 To aid focusing in the dark the SX50 HS has an AF assist beam and pop up flash that can be flicked up from the body. Sitting behind the flash is an electronic viewfinder that boasts a 202,000 dot resolution. There’s no eye sensor though so you do have to hit the display button to activate it. Looking through the viewfinder reveals it is an extremely small display but we shouldn’t grumble too much. It’s better to have one than not one at all. 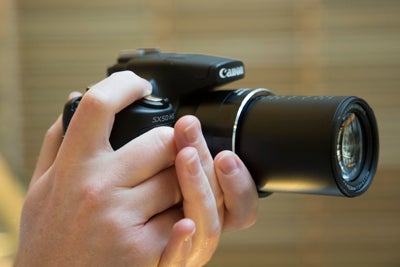 The screen at the rear is the vari-angle type, measures 2.8inches and has a 461,000 dot resolution. First impressions of it are good. It’s sharp and seems to display faithful colours. The way it swings out and up and down will be particularly useful for macro work or when you need to hold it high up above the crowds.   Something often overlooked on bridge compacts is the ability to shoot in the Raw format. This has also been considered on the SX50 HS. You’re given both Raw and JPEG image formats to choose from, or you can shoot in both simultaneously. AF point selection is fairly quick. Just hit the button below the movie-rec button before using the dpad to reposition the AF target. It’s not possible to move the AF point to the far edges of the frame but you can reduce its size using the display button.

As for the build, the handgrip feels comfortable but the exterior of the camera is made from very smooth plastic and there’s no rubberised grip to give it some bite in the hand. That said, it does feel fairly strong for a camera with a plastic exterior and it’s reasonably lightweight too.

Other points to note are Full HD video support at 24frames per second, it accepts SD, SDHC and SDXC cards, features a rechargeable battery that’s good for 315 shots and costs £450.

To sum up our first impressions, the SX50 HS has an extensive zoom that operates quickly. We would have liked finer control of the zoom but the ergonomics are excellent and it’s not too heavy. A rubberised grip was also lacking and the plastic finish gives it a very smooth feel in the hand.