Canon's latest High Sensitivity snapper, the SX260 HS, updates last year's SX230 HS model and is designed to be the perfect travel companion and in all lighting conditions. But is it?

£329.00
Canon’s latest High Sensitivity snapper, the SX260 HS, updates last year’s SX230 HS model and is designed to be the perfect travel companion in all lighting conditions. It features a remarkable suite of snapping equipment including a 20x optical wide-zoom lens, 12.1-megapixel CMOS sensor and Canon’s DIGIC 5 image engine. We see if it’s any good.

Canon’s SX260 HS is a stylish and smart-looking compact snapper; it’s also remarkably slim and compact given the 20x optical zoom, 25mm wide-angle lens. The 25mm to 500mm zoom allows you to fit more in the frame or allows you to get extremely close to distant subjects at full zoom. Canon also makes much of its new ZoomPlus digital zoom technology that provides up to 39x zoom magnifications and claims this “advanced zoom technology” is able to capture “more visible detail and sharpness than conventional digital zoom”. Though I’ve never been an advocate of digital zoom, it seems to work well enough if grainer, shaky shots are your thing.

Given the lens on hand, the camera has a neatly compact body, allowing you to take this camera with you almost anywhere and still get a reasonable chance of getting the shot, whatever it may be.

It’s one of a range of modern compacts that have been designed and targeted at those on holiday or that do lots of travelling and yet don’t want to carry a massive DSLR kit with them.

To help get the most of the features available, the Canon PowerShot SX260 boasts Canon’s HS (High Sensitivity) system on a 12.1-megapixel CMOS sensor and using the company’s latest DIGIC 5 image engine that also allows HD Video (with stereo sound) capture into the bargain.

The HS System aids in low light shooting meaning you have a better chance of being able to capture the real atmosphere of the light in a shot without resorting to flash or the need for a tripod. At least that’s the theory. 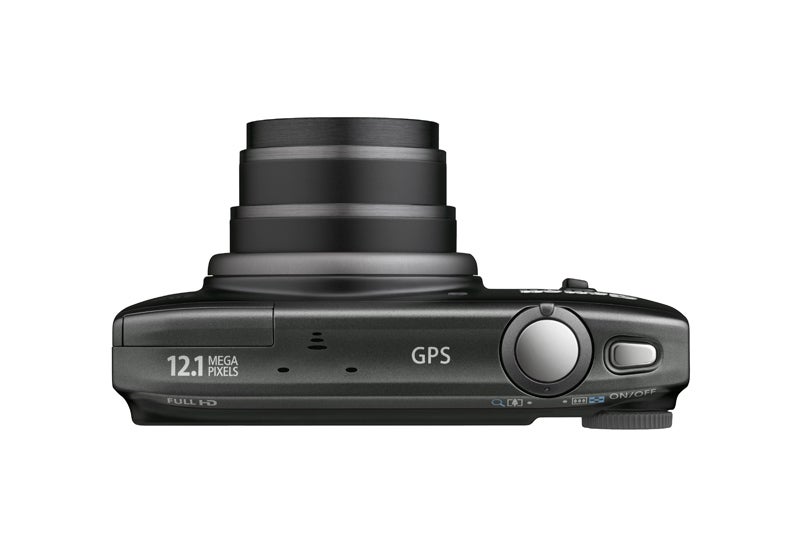 Images can also have GPS tags for the location of your shoot with any videos you shoot able to use the camera’s clever Logger function to keep track of your photographic journey. Supplied Map Utility software means you can pinpoint shooting locations and then share them with friends.

Another advance is in Canon’s Image Stabilisation (IS) system with “Intelligent IS” designed, says Canon, to combat camera shake by automatically adjusting the optical image stabiliser to the subject you’re snapping from seven modes.

As with most of today’s compacts the PowerShot SX260HS is capable of snapping HD movies, here via a dedicated movie button means you can quickly record Full HD (1080p) movies with stereo sound. But in what is one of the best implementations of the system, you can use the optical zoom when shooting with almost no audio interference, which is a real boon for those shooting movie clips while the Intelligent IS system remains active throughout and helps keeps footage as steady as it can. 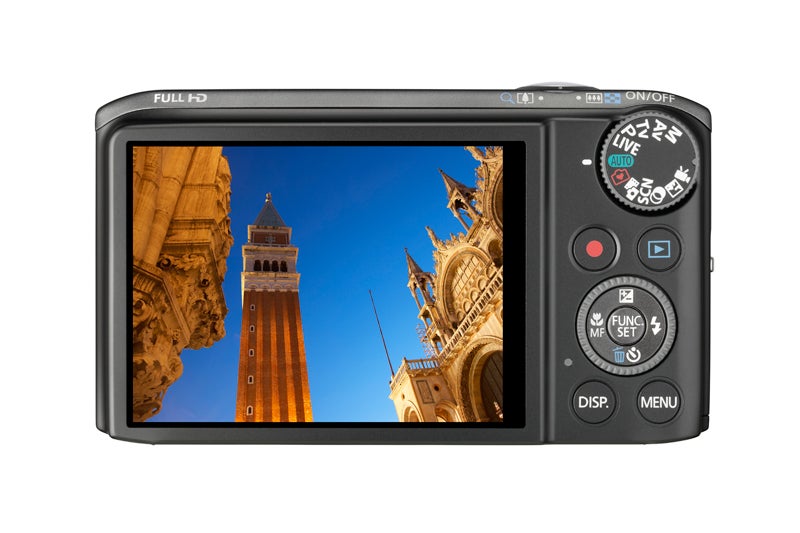 The camera’s large, 460k-dot LCD is great to use and has a tempered glass outer layer to make it suitably rugged and able to withstand the likely abuse meted out in a pocket or travel bag on holiday. It’s also usable in all but the most direct of strong sunlight, so composition and image or video reviewing and menu navigation from almost any angle is possible but in sunnier climes, I still feel that without the back up of an optical viewfinder, there could be issues.

For the less photographic minded users among you, those wanting a piece of neatly sophisticated snapping technology but that’s easy to use, the SX260 HS has a clever Smart Auto mode and no less than 58-scne modes.

Smart Auto can be used in both movie and stills shooting and it detects the scene before the lens and then selects the best combination of settings from the 58 variables built into the camera’s system. There are 21 variables available to throw at movies.

You can register up to 12 faces in the camera’s intelligent Face ID system too and then if detected in a crowd, say at a party, the registered faces become the focusing priority in each shot. So why is the camera’s Face ID system is clever? Well, there are many cameras today that can have faces stored within their systems so they are recognised and focused upon by the camera in a crowd, but the system used in the SX260 HS can adapt to the person it detects before the lens. A good example is its ability to automatically change settings according to the age of the person stored on the camera.  In this way, the camera can turn off flash and its system beeps and noises if it detects you’re snapping a sleeping baby.

The more photo-savvy among you need not worry as the camera has a full suite of manual shooting controls, including full manual control aperture and shutter priority settings too. Alongside that the SX260 HS has a high-speed shooting mode for capture of fleeting action with a High-speed Burst mode or Super Slow Motion Movie both able to capture fast action for finer analysis if you need it.

In terms of the overall design, the camera has a relatively straightforward – nay boring – albeit neat design; edges are smoothed off and rounded for nice ergonomics and the camera feels satisfyingly solid (and heavy) in the hand. It boasts a simple control layout on the top plate with an on/off, shutter release and associated lens zoom control joined by a slim, pop-up flash.

The front has the 20x optical zoom lens with a well-placed handgrip on the right side of the face but when you get to the back plate, things get only slightly more complex. A large mode dial is sat on the top right corner of the back plate and from here you can get to all the main shooting modes. There’s a manual or “creative” mode section (above the Auto mode) and the automated mode area below it. Manual, Av and Tv settings are joined in the creative side by Program and a neat Live View Control mode.

Live View Control provides you with three sliders (when the Func/Set button is pressed) that provide onscreen adjustment of brightness (Light/Dark), colour (Neutral/Vivid) and colour temperature (Cool/Warm), which can be adjusted as you view the scene to be shot. As the name suggests, it’s live control over those three parameters and means you can have simple if a little fiddly controls to get more from a shot.

Switching to the more automated settings, Auto mode does everything except press the shutter button for you including assesses the scene and pick an appropriate one for the subject (portrait mode for portraits and so on) which it does rather well overall. However it struggled on strongly backlit subjects where it wanted to pick a high-speed subject setting.

Easy mode is there too, which does all that Auto mode does but removes the menus and shooting settings that are otherwise available in the Func(tion) menu, more of which later. Movie digest provides a short movie clip with each image you snap, great for sharing online or later on TV say but not so good for printing and Scene mode come next, with the Scene modes proving a further 11 settings including panoramic stitch assist and portrait and smooth skin modes as well as Smart Shutter mode that uses face detection software to detect a smile and fire the shutter for you. It takes three shots to make sure it gets a good’n for you.

But this is where I encountered a few of the first irksome issues with the SX260 HS. The Smile Shutter system is slow, very slow and I found it required a rictus-like grin to be held for about four-seconds before it keyed in the focus system and started to take shots.  It also does not like people wearing spectacles, which required a grin to be help for about six-seconds before it took shot.

As you’d expect, in auto modes the auto flash is activated but the flash’s position and the way it pops up means your left hand is almost ALWAYS in the way. The natural way to hold a compact is with hands wrapped around the controls on the right (index finger over the shutter button, thumb on the mode dial) and index finger of the top of the camera on the left side with the thumb balancing the camera underneath.

But with auto flash on, I found my left index finger would (inadvertently) hold the flash down momentarily as it tried to activate, the camera would then report a problem with the flash in the wrong position and the only way to sort it out was to restart the camera.

Next on the mode dial is the filter setting where you can apply miniature, fish-eye, toy camera and super vivid modes to name a few. Many of these are common to many similar cameras from other makes and let you have even more fun with your photos and video as they can also be used when shooting video footage too. Discreet mode is there for snapping without any camera noises and a movie setting allows you to pre-assign movie mode from those available of Standard and Super Slow Motion modes with iFrame mode in there for compatible devices too.

The camera’s large 3-inch screen dominates the back plate while the last controls, sat to its right side and below the mode dial, include the direct movie and playback buttons, display and menu controls as well as the four-way control with its neat, rotating ring for faster scrolling.  Settings reached from the four-way control include flash, exposure compensation, self-timer and focus modes. The central Func(tion)/Set button activates on screen menu items when shooting or set features chosen from within the camera’s clear, well laid out menus.